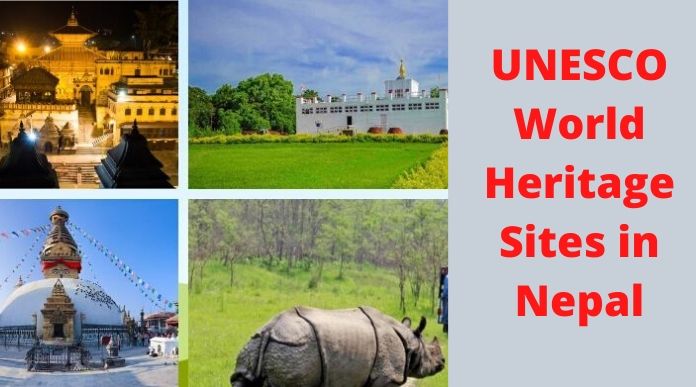 A World Heritage Site is an area that the United Nations Educational, Scientific and Cultural Organization (UNESCO) selects for having historical, scientific, cultural or any other kind of importance. The international treaties protect such sites or landmarks. There are altogether four UNESCO world heritage sites in Nepal. The sites under the UNESCO list are crucial for the interest of the whole of humanity. UNESCO intends to conserve these sites for posterity. There are 1121 places from 167 countries in the UNESCO heritage sites’ list including four places from Nepal.

In the year 1976, Nepal established the famous Sagarmatha National Park. This national park is the first to come in the list of world heritage sites of Nepal. The Sagarmatha National park covers an area of 1148kilometers square. This place falling in the list of world heritage sites in Nepal is home to diverse plants and animals. The mighty Mt. Everest resides here and is 8848 meters tall.

There is vegetation like birch, bamboo, birch, juniper, rhododendron, pines and more in the lower area. Mosses and liches are present in the higher elevation zone. As you move up, the vegetation becomes sparse, and snow is there. This national park has animals like red panda, snow leopard, the Himalayan black bear, Himalayan monkeys, musk deer, and more. Also, there are around 118 bird species, including the Himalayan Munal, yellow-billed chough, red-billed chough, blood pheasant, and so on.

Chitwan national park is another place in the list of world heritage sites of Nepal. It is on the south-central side of the subtropical region around the Inner Terai. The Chitwan National park has an area of 952.63 kilometres square and is home to various animals and plants. You will see Sal Trees, high grasslands, Terai-Duar Savanna in this zone. More than 700 species of wildlife, 600 bird species, and around 68 mammal species stay in the jungle. For someone who loves mother nature and exploring her creations, you must visit this area. You may spot the Royal Bengal tiger, and one-horned rhinoceros there. There are antelopes, striped hyenas, oriental darters, spotted eagles, gharials, golden jackals and different animals at the park.

Lumbini, which is in the list of world heritage sites in Nepal, is the birthplace of Lord Buddha. It is just three hundred kilometres south of west of the capital, Kathmandu. Residing in the Terai region of Nepal, Lumbini is a famous pilgrimage site for people in and outside of Nepal. Many people visit this place out of all the UNESCO world heritage sites in Nepal. You can see the Maya Devi temple, Ashoka Pillar, World Peace Pagoda, Sacred Garden, Tilaurakot palace and other monasteries in Lumbini. Different monasteries are there. You may plunge into the experience of walking across this sacred place. See the monuments as well as landmarks of Nepal.

Museum is there for you to find out more on Buddhism. A research centre holds birds of rare species and protects them. You will have a great time in Lumbini out of all UNESCO world heritage sites in Nepal. There is no problem of food and lodging facility, and there is so much to see and explore.

Another critical heritage site of Nepal that falls in the list of world heritage sites of Nepal is Pashupatinath temple. Hindu believers around the world revere this temple. While only Hindus can enter the main temple, you may observe the surrounding of the temple premise freely. Watching the unique ceremonies and rituals here is an exquisite experience that may affect you profoundly. This site attracts a vast number of pilgrims each year. And it sees a massive inflow of people during festivals like Shivaratri and Teej. There are over 518 temples along with monuments in this area of 518 hectares.

Kathmandu Durbar Square or Basantapur Durbar Square is a significant destination in Nepal which has great architectural and cultural value. Some decades back, the monarchs from the Malla and Shah era lived in the palaces. Along with the palaces, there are squares with courtyards and temples. You might see the beautiful windows with excellent woodwork. Mahendra Museum and King Tribhuwan museum are open to visit there. This UNESCO world heritage site has significant cultural value.

Also, at the Kumari Chowk, you shall find the house where Kumari lives. Kumari is the living goddess of Nepal. She is the incarnation of Talegu goddess. You get the opportunity to find out about the history and culture of Nepal with this world heritage site visit.

Like the Kathmandu Durbar Square, Patan Durbar Square has old palace, temples and courtyards as it was home to ancient kings and queens of the past. Patan was back to the King Yalamber after whom the name “Yala” comes. Just eight kilometres south-east of Kathmandu, Patan resides as a popular tourist destination. It sees the inflow of both internal and external tourist.

The structure of the palace and temples presents you with a more in-depth insight into Newari craftsmanship. Both Buddhist and Hindu monuments are present. People believe that Emperor Ashoka created certain portions of the Square in the third century B.C. Some places you should not miss on your tour to the list of heritage sites in Nepal include
Hari Shankar temple, Mahabouddha temple. Also, there is Krishna temple, Mahabouddha temple, Kumbeshwor temple, Bhimsen temple, Rato Macchendranath temple, Bishwanath temple and more. Local shops and eateries provide you with souvenirs to take back home. And you can taste the Newari delicacies here. People love this UNESCO world heritage site in Nepal.

Boudhanath Stupa is another famous place from the list of heritage sites of Nepal. It holds great value for the Buddhist followers. We may see many people from across the world, visiting Boudhanath and paying their homage. The Licchavi King Shivadev set up this Stupa in the fifth century. This Stupa is one of the biggest Buddhist Stupa in the globe. Mostly Buddhist people occupy the nearby area. And there are more than forty monasteries at proximity. The locals, tourists as well as pilgrims, come to this site each day. You shall find monks chanting, pigeons feeding on grains, enchanting smell of incense sticks, people spinning prayer wheels with reverence in Boudhanath premises. Immerse yourself in the harmony of the moment and savour the tranquillity.

Bhaktapur city is the oldest city in Nepal. And the Bhaktapur Durbar Square is one of the most former palaces at Kathmandu. This city is twelve kilometres from Kathmandu on the eastern side. The durbar square showcase the excellent craftsmanship and architectural excellence of Nepal. The four squares in Bhaktapur include Taumadhi Square, Durbar Square, Pottery Square, and Dattatreya Square. Bhaktapur is one of the notable heritage sites of Nepal. The golden gate, lions gate, Statue of King Bhupatindra, Art gallery, fifty-five windowed Malla palace, and the Nyatapola temple are the essential elements to observe and relish. It is one of the most famous UNESCO world heritage sites in Nepal.

The origin of Swayambhunath Stupa dates back to over 1500 years ago. This Stupa is one of the oldest monuments in Nepal. The structure of Swayambhunath represents the elements, namely fire, earth, water and wind. People say this Stupa emerged itself when the current valley came into existence from the dry lake. Both Hindu and Buddhist followers rever this Stupa, which lies at the hilltop of Kathmandu. It is a proper blend of the architecture of Hindu shrines along with Buddhist stupas. Three hundred sixty-five stairs are there up to the Swayambhunath stupa. The Stupa is an excellent viewpoint that overlooks the whole Kathmandu valley. This site will provide you with a unique experience out of all heritage sites in Nepal.

Changu Narayan is another place that is in the list of world heritage sites of Nepal. It resides on the hilltop of Changu/ Dolagiri. The lush green forest surrounds the temple area. Also, there is a village named Changu near. Changu Narayan temple is fourteen kilometres on the eastern side of Kathmandu. The temple has a unique temple inscriptions and pillars. There are different statues which date back to 464 A.D. If you want to find out more about its history, you may go to the museum near the temple. You will get to know about the fantastic myths surrounding ChanguNarayan and the people there with this visit. Changunarayan temple has great religious and historical value for the country and its people.

Sculptures of ten incarnations of Lord Vishnu are in the temple; they include Nar-Singha Vishnu, Vishnu Vikranta, Vishwaroop, Vishnu riding Garuda, and others. The temple of Chinnamasta Devi, Kileswar Shiva, and other deities are present. You get to savour the mesmerizing view of the Manohara river across the green vegetation.

Plan a fantastic tour around these valuable UNESCO world heritage sites of Nepal with Source Nepal.

The capital city of Nepal, Kathmandu is home to seven World Heritage Sites recognized by UNESCO. Overall there are a total of...
Read more

Why To Visit Ilam? Have you ever admire the beauty of Ilam? There're lots of beautiful places to visit...
Read more