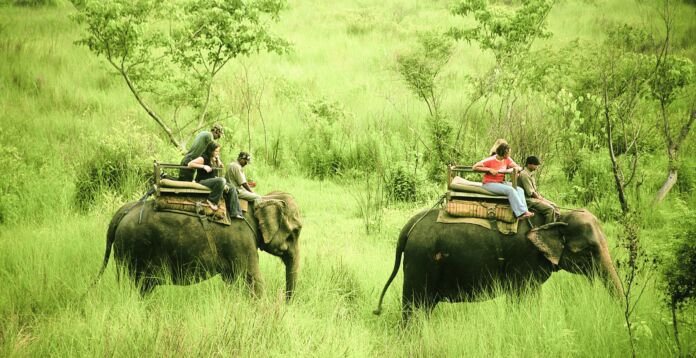 Bharatpur is South Central Nepal’s economic and service capital and a key regional center for higher education, health services, and transportation. Chitwan is in the Terai district of Nepal.

It is situated in the drainage basin of the Gandaki River. It has a roughly triangular form, with the river running through it on the northwestern side and a minor watershed border with India on the south.

The district was named after the Chitwan Valley, one of Nepal’s Inner Terai valleys between the Mahabharat and Siwalik ranges, known as Himalayan foothills.

Chitwan is one of the last unspoiled areas of Nepal’s Terai district, which historically encompassed most of the country. It used to be a dense jungle abounding with exotic animals, including Bengal tigers and leopards. Chitrsen Baba controlled it, and rishis meditated in the forest.

Ayodhyapuri, in Southern Chitwan, is considered the birthplace of the Hindu god Ram by Nepalese Hindus.

There are many different theories leading to the origin of the name Chitwan:

Places To Visit In Chitwan

There are several tourist sites that you can visit while you’re on vacation in Chitwan. They are:

The first national park in Nepal is Chitwan. It was founded in the year 2030 BC. The conservation area covers 932 square kilometers and is a UNESCO World Heritage Site. An elephant breeding center and a vulture and gharial conservation area are among the park’s features. There are also other temples inside the park’s limits, including Lami Taal, Bikram Baba, and Tamor Taal.

Furthermore, many visitors who return to the park will also visit Sauraha to enjoy the resorts there. Popular activities include elephant riding and exploring the community forest. Finally, many people travel to learn more about the lifestyles, cultures, and dances of indigenous ethnic groups such as the Bate, Tharu, and Majhi.

The Bishazari Taal is an extensive oxbow lake system located within the Chitwan National Park buffer zone, a protected area and a designated world wetland area. This location is ideal for bird watching because it may serve as a winter habitat for several birds migrating south from Siberia.

In addition, tiger, deer, and rhino live in this area. Bishazari Taal is adjacent to Bharatpur’s district headquarters, convenient for individuals who don’t have much time to pay in Chitwan.

This is one of Chitwan’s newest locations, and it’s sprawled across four Bigahas in Bharatpur-19, Kirangunj. It’s been turned into an open-air sculpture museum and is a popular spot for picnics. There are additional boating opportunities.

The waterfall in Chandibhanjyan VDC-nine is a twenty-minute walk from the Jalbire temple, located on the Narayangadh-Muglin road portion. With a drop of 100 meters, this waterfall is a major tourist attraction in the Bharatpur area, and locals and visitors alike love swimming there. This is also a popular destination for tourists interested in canoeing or participating in homestays with the Gurung, the locals.

For all Hindus in Nepal, Devghat Dham is sacred. During festivals or auspicious days, this location is overrun by devotees. Devotees frequently bathe or dip in the Holy waters, which are claimed to cure all diseases and problems.

The Devghat Dham is a fantastic site to go to if you want to learn about Nepal’s spiritual culture and rituals. If you’re lucky enough, you can even get to witness the morning and evening prayers, which are also massive events.

Chiraichulis, a new traveller attraction with a height of 946 meters, is a particularly fashionable site to see the sunrise. The location is accessible via routes branching from the Prithvi, Hattibang, or Shaktikhor highways.

Those who want to see the sunrise should spend an evening in Hattibang 1st. It’s roughly an hour’s walk from there to a favorite viewpoint spot, where one may gaze out over a gorgeous, blossoming range of mountains.

The Chitwan national park is home to one of the world’s two elephant-rearing centers. In Nepal, the elephant quickly becomes one of the most endangered animals, and a center was constructed to increase its numbers.

You might have the chance to visit the reproduction center. Make a decision about how to bring the pachyderm to the public’s attention and get a chance to see some bovine elephants and their calves.

Cuisines such as Newari, Tharu, and Thakali are also popular. For millennia, fermented foods and beverages have made up around 20% of the native diet. Depending on height, crops such as finger millet, maize, buckwheat, barley, vegetable, rice, potato, and soybeans are produced.

How To Reach Chitwan?

The region’s lone airport, offering flights to and from Kathmandu, is Bharatpur Airport. The Mahendra Route, Nepal’s most important east-west highway, and the Prithvi Highway, which runs north-south from the Indian border to Kathmandu, run through the district.

Narayangarh is a hub for vehicles travelling east-west on the Mahendra Highway and people travelling from Kathmandu, Gorkha, and Pokhara via Mugling.