The Weather of Nepal in December 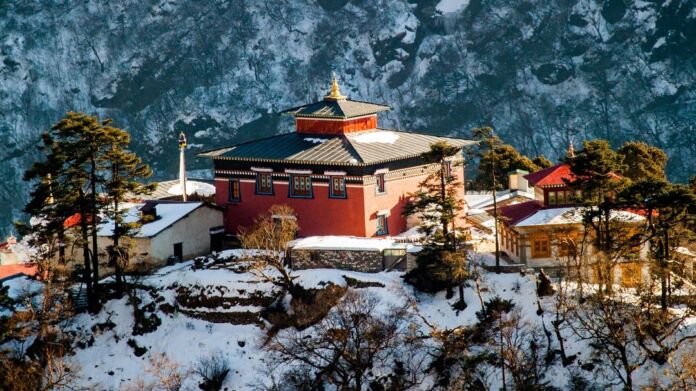 As we all know, December is the beginning of the winter weather of Nepal. The average high temperatures range from around 15 °C (about 59 °F) to 21 °C (70 °F) high on average and drop to an average minimum temperature of 8 °C (46 °F) during December month. During December, rainfall is least expected.

Weather in Mountain Region of Nepal During December

The weather condition gets worse as you go to a higher altitude during December. At certain days you also might get the chance to experience snow due to extreme cold and foggy weather. If not snow, you will surely get to experience the drizzle of rains. The weather can get sunny to an extreme during December in Himalayan areas. The minimum temperature of the Himalayans region is -4 °C, and the maximum temperature is 16 °C.

Although the weather may not be freezing in Hilly region as compared to mountains, it’s undoubtedly not warmer in the hilly area either. However, during the mid-day, most of the time, you get to experience warm weather without any rain or snow or foggy weather. The minimum temperature of the Hilly region during December is 17 °C whereas the maximum temperature is 21 °C.

Since the Terai region is one of the hottest areas of Nepal, this place is slightly lesser colder than Hilly and Himalayan area. As for December, the minimum temperature is 20 °C, and the maximum temperature is around 25 °C. Time to time, the weather can get hotter than the other day or vice-versa due to the change in the climate.

Nights can get quite chilly during the winter, usually dropping to the freezing temperature, so wear warm clothes, including thermal garments, and possibly a blanket or thick sleeping bag. In fact, during the month, December in an average of 8 to 9 hours of sunshine is daily visible.