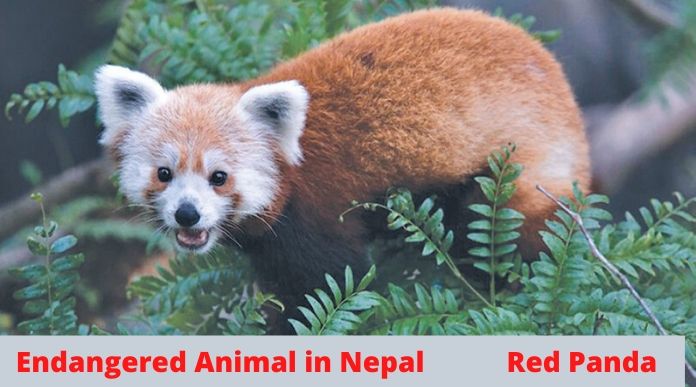 The red panda is one of the most endangered mammals that dwell in the Himalayan region of Nepal. Over the years it has been calculated that only 10,000 of these rare animals remain in the planets with most them being in Nepal.

The red panda is covered with reddish-brown fur and has a hairy tail, which gives it the looks of a domestic cat. Besides being called red panda, it is also sometimes called different names like the lesser panda, the red cat-bear, and the red bear-cat.

What is Red Panda Called in the Nepali Language?

The word panda originates from the Nepalese word poonya which translates into the bamboo eater. In most parts of Nepal, the red panda in nepali language is referred to as habre and sometimes as bhalu biralo(रातो पांडा) (bear-cat).

The Sherpas residing in Nepal and Sikkim call it a wah donka and ye niglva ponva.

However, in the eastern part of Nepal, the ethnic group of Limbu people call it as kaala (dark), and the villagers with Tibetan origin call it as hoptongar.

Some say that poonya might have come from the Nepalese word panja, which mean claw.

The scientific name of the red panda is Ailurus fulgens, and in English, it is called names like a true panda, lesser panda, and sometimes common panda.

Which National Park is Famous for Red Pandas in Nepal?

The wildlife conservation area was first established in 1976 and is Nepal’s first-ever Himalayan national park and the most protected area. The park extends into three major districts of Nepal; Sindhupalchowk, Nuwakot, and Rasuwa and encloses 26 village communities.

In 2019, a team of officials spotted five red pandas in the same area, which is the first of its kind. The authorities say that Guypche, Cholangpati, Dhokachet Kharka, and Polangpati, are the main habitats of these endangered animals.

Other National Parks with Red Pandas in Nepal

Other national parks and conservation areas that have been housing red pandas are:

These places are known to have 25% of the total population of the red pandas, while the rest were spotted outside these protection zones.

In Which Part of Nepal is Red Panda Found?

This herbivorous animal is usually found in the Himalayan forests in the western part of Nepal and the mountain slopes of south-west China.

Ilam on the eastern region of Nepal is now home to fifteen red pandas. Due to increasing abundance of these endangered species, Ilam now boasts of several tourists visiting their home stays annually. Pandas have also been spotted in the Lamjung district.

Studies state that at present, there are 237 to 1,061 red pandas in Nepal and the population is declining due to low fertility rate, parasitic infection, high infant mortality rate, bamboo flowering, and population isolation.

There are also other reasons that have affected the decline in the population of red pandas. They are:

In order to protect these animals from being extinct, the Nepalese Government has passed a law according to which a convict caught of trading a red panda will be put in jail for ten long years with a fine of NRS 500,000.

According to The Himalayan Times, about 22,400 km sq of Nepal is home to red pandas. As per the figure, it is approximately 56.25% of potential habitat of the mammal in the Hindukush Himalaya region.

The red panda usually prefers living at an altitude of 2,500 – 4,000 but is reported to have descended to 1,500 m. Zoologists say it avoids residing in areas with south-facing slopes and prefers colder climatic conditions.

Rumours have it that trekkers and mountain climbers have spotted the red panda in over 36 districts of Nepal while 24 areas have been confirmed to be the natural habitat for those endangered species.

Being an endangered species of mammals very few people have spotted red pandas in their natural habitat while most have them have seen them in captivity in zoos.

The red panda has a long body like that of a cat and is covered in reddish-brown fur with a long bushy tail. It looks similar to a racoon, but each of them has different markings like a zebra.

The body of fully grown measures between 50 to 64 cm and its tail extends from 28 to 59 cm in length. Male pandas can weigh up to 6.2 kg while a female panda weighs up to 6 kg.

These animals usually feed on bamboo and have strong, sharp claws which are useful for grasping tree branches, fruits, and leaves. Red pandas spend most of their lives curled up in trees with their head hid beneath their bushy tails. Its thick reddish-brown fur provides insulation from the cold and harsh weather of the Himalayan region of Nepal.

A red panda usually lives for over eight to ten years, but some say that they can live up to 15 years.

Red Panda is the most beautiful and lovely animals, but sadly it is one of the most endangered animals in Nepal. According to the Nepal government report, there are around 1,061 red pandas left. This post is drafted by Source Nepal professional team, and from this, we just want to say preserve these animals. They are valuable for our Nature.

A World Heritage Site is an area that the United Nations Educational, Scientific and Cultural Organization (UNESCO) selects for having historical, scientific,...
Read more
Nepal

The capital city of Nepal, Kathmandu is home to seven World Heritage Sites recognized by UNESCO. Overall there are a total of...
Read more