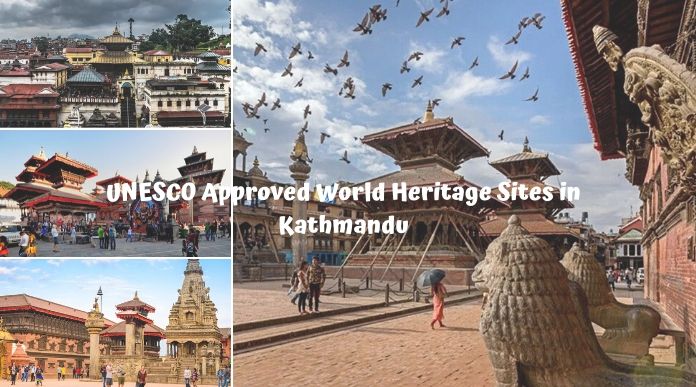 The seven world heritage sites within the Kathmandu Valley lie at a distance of 20 km away from each other. Therefore, if you are visiting Nepal or Kathmandu for the first time and want to explore all these sites in a day but unsure whether it’s possible or not? Then the answer to your question is, yes.

How many World Heritage sites are there in Kathmandu, Nepal?

Nepal is home to 10 UNESCO approved World Heritage Sites out which seven of there are located in the capital city itself.

Ten criteria must be met before being recognized as a World Heritage Sites by the UNESCO. Out of these, four are for natural, while six were for cultural.

Pashupatinath Temple was recognised as a UNESCO World Heritage Site in the year 1979. The Hindu temple complex lies about 5 km away on the north-eastern side of the Kathmandu valley.

It is located in the banks of the Bagmati River, which originates at Baghdwar, Sundarijal. The Licchavi King Prachanda Dev built Pashupatinath during the 5th century after termites demolished the previous structure. Over the years, many new temples have been installed in the temple complex.

Pashupatinath Temple is regarded as one of the sacred Hindu temples in the world and is amongst the four must-visit holy places in Asia for devotees of Lord Shiva.

According to Hindu scriptures, Lord Shiva and Goddess Parvati once took the shape of an antelope and grazed in the forest of the Bagmati River.

The Gods later descended to earth and grabbed Shiva by the horns and forced him to get back to his godly duties.

During this hassle, the horn of the antelope broke and was later erected as a Shivalinga. The Shivalinga was lost over the years, but once herdsmen spotted his cows wetting the earth with their milk. The herdsmen dig the land and later found the missing Shivalinga.

The temple receives a vast number of visitors during Shivaratri, a major Hindu festival, where devotees from all around the world gather to worship Lord Shiva.

Kathmandu Durbar Square is amongst the three royal palaces within the Kathmandu Valley which have all been recognised as World Heritage Sites by UNESCO in 1979.

Kathmandu Durbar Square or Hanuman Dhoka Palace was house to the former monarchs of the Malla and Shah dynasty. After the end of monarchy in Nepal in the 19th century, the palace is now turned into a museum.

The premises of this World Heritage Site is full of temples built by the early Newari artists. The statues in the temple date back to the 16th century.

After the 7.2 M earthquake in Nepal, many of the Kathmandu Durbar Square’s structures were damaged beyond repair. However, renovation and preservation of this site have been going on.

Another well-recognised World Heritage Site within the Kathmandu Valley is Boudanath which lies 11 km (approx) from the centre. The stupa, with its gigantic mandala, is one of the biggest stupas in the world.

According to Nepalese history, Boudanath was founded by the Licchavi King Śivadeva while other history books say that King Mānadeva established it.

The site was excavated during the early 15th to 16th century where archaeologist found the remains of King Amshuvarma who lived between 605-621 CE.

The place is of religious importance to followers of Buddhism and Hinduism and is mostly visited by Buddhists during their festivals.

The 2015 earthquake had devastating effects on the Boudanath, and the spire suffered a major crack. The whole structure was renovated and opened to the public on 22nd November 2016.

Famous amongst outbound tourists as The Monkey Temple, Swayambunath or Swayambhu is a holy place in the Kathmandu Valley. UNESCO recognised the sacred place as a World Heritage site in 1979.

The Monkey Temple lies on top of a hill that is surrounded by wild varieties of trees, followed by shops, restaurants, hotels, and hostels.

The entire complex consists of a stupa which is regarded very sacred by the followers of Buddhism. A museum and an academic library were recently installed in the temple premises.

King Vṛsadeva founded it during the start of the 5th century CE. Later King Ashoka from Sri Lanka visited the place and built a temple on top of the hill, which was later destroyed. King Pratap Malla then added the long stairway to the temple during the 17th century.

The most important part of the Swyambhunath temple is the eyes of Budhha that look out in all four directions.

It is the royal palace located in the Bhaktapur district within the Kathmandu Valley. The castle lies at the height of 1,400 m above sea level.

The palace complex is in the centre of Bhaktapur, which is also famously known as Khwopa, about 13 km away from the capital city.

Rumours have it that there were overall 99 courtyards in the palace while only six remain to this date. The Bhaktapur Durbar Square suffered significant severe damages during the 1934 and 2105 earthquake. It was recognised as a World Heritage Site by UNESCO in 1979.

The major attractions of this palace are:

Changu Narayan is an ancient Hindu temple that lies about 12 km away from Kathmandu. The main temple is atop a hill known as Dolagiri or Changu, a village surrounded by thick, dense champak trees.

This Hindu temple is dedicated to Lord Vishnu and is believed to be the oldest temple in the history of Nepal. The inscription in the Historic pillar dates back to 464 AD and is said to have been erected by the Lichhavi King Manadeva.

The temple is named after Queen Champak who was married to the prince of Bhaktapur.

The temple is crowded with worshippers and visitors during the Changu Narayan Jatra. Other major Nepali festivals like Mahashanan, Jugadi Nawami, Haribodhini Ekadashi, and Nag Panchami are also celebrated in this temple.

Patan Durbar Square is part of the three Durbar Squares within the Kathmandu Valley. It is the palace where the ancient Malla Kings used to reside.

Listed in the World Heritage Sites in 1979, the Patan Durbar Square is a masterpiece of primitive Newari architecture. There is a conflict in theories as to when the Durbar was first built. Some historians claim that the architecture now found in Patan Durbar Square dates back to the 16th century during the reign of Yoganarendra Malla and Sivasimha Malla.

The entire courtyard of the square is tiled with red bricks which gives it a unique look. The whole palace is full of idols and temples of Hindu gods.

Overall there are a total of 55 temples and 136 courtyards in the Patan Durbar Square.

Other World Heritage Sites in Nepal are:

Trekking, along with yoga and meditation, can truly enrich your experience of the scenic natural beauty of a site with the increased...
Read more
Nepal

Yoga practice brings people closer to the experience of their life. It is a blessing to your physical, mental health and wellbeing....
Read more
Nepal

Nepali Bank SWIFT Codes Every month, there is a long queue of people at banks and remittance offices to...
Read more