Besides mountains and hills, Nepal is also home to several Hindu and Buddhist temples. The country’s history dates back to thousands of years and is known for the oldest holiest places on the planet.

Followers of Hinduism and Buddhism consider these religious sites scared for their redemption, and annually several worshippers and devotees visit these holy places. Today in this article, we discuss the 15 sanctity sites spread all over Nepal.

What are Holy Places?

Any place considered sacred by a religious faculty or a cult is referred to as a holy place. They are usually sites of very special religious significance. People visit these places to pray for a prosperous life, free from problems, and in hopes that their lord will grant their wishes.

Such places are generally visited by pilgrim-goers. There are many places in the world that are considered holy for religious sects like Hinduism, Buddhism, Muslims, Christianity, and many others.

List of Top 15 Religious Places to Visit in Nepal

Despite being a secular country, Nepal is mostly known for the ancient Hindu and Buddhist holy places. Hinduism is followed by 81.3% of the Nepalese population, Buddhism comprises about 4.4%, while there are 3.0% Muslims and 1.4% Christians.

Nepal is one of the most prominent tourist destinations in the world, and the temples play an important role in promoting religious tourism. Below we enlist the top 15 holy places and temples to visit while in Nepal.

Situiated in the banks of Bagmati River, Pashupatinath Temple is one of the scared and oldest Hindu holy site in Nepal. The temple lies in the eastern side of the capital city and is listed as a UNESCO World Heritage Site.

This holy place devoted to Lord Shiva, is amongst the four most important godly sites dedicated to Shiva in all over Asia. Pashupatinath was built during the 5th century and was renovated during the reign of the Malla Dynasty. The site is rumored to have existed since the start of the millennium.

The main temple is built in pagoda style with silver-plated roofs and has wood carvings depicting the story of Shiva. During the time of the kings, the roofs and the Gajur were made of gold and the doors of the temple were made of silver.

Swayambunath lies on the west side of the Kathmandu valley and is an ancient religious site for the followers of Buddhism. Swayambhu or Swoyambu means self-sprung, and the hill is well known for the varieties of trees growing on it. It is popular among tourists as the Monkey Temple.

The religious complex consists of a massive Buddhist stupa, cluster of temples, and shrines dating back to the Licchavi period. In the recent years, a Tibetan monastery, library, and museum were added to Swayambhu complex.

The exterior of the stupa is painted with the eyes and eyebrows of Lord Buddha, and the digit 1 is painted in between those eyes like a nose in Devanagri script.

Swayambunath can be visited by two means; taking the long staircase or a car-road that leads to the south-west entrance of the site. There are several shops, restaurants, cafeteria, and hostels around the place.

This Buddhist religious site lies on the northeastern part of Kathmandu and 11 km away from the centre of the capital. The UNESCO World Heritage Site recognizes Boudhanath as a historical site, and the stupa is one of the largest stupas around the world.

The stupa’s enormous mandala makes it one of Nepal’s largest spherical stupa that holds the remains of Kassapa Buddha.

The stupa lies on the ancient route from Tibet, leading from Sankhu village into the Kathmandu Valley. The area of Boudha is now home to several Tibetan Buddhists. 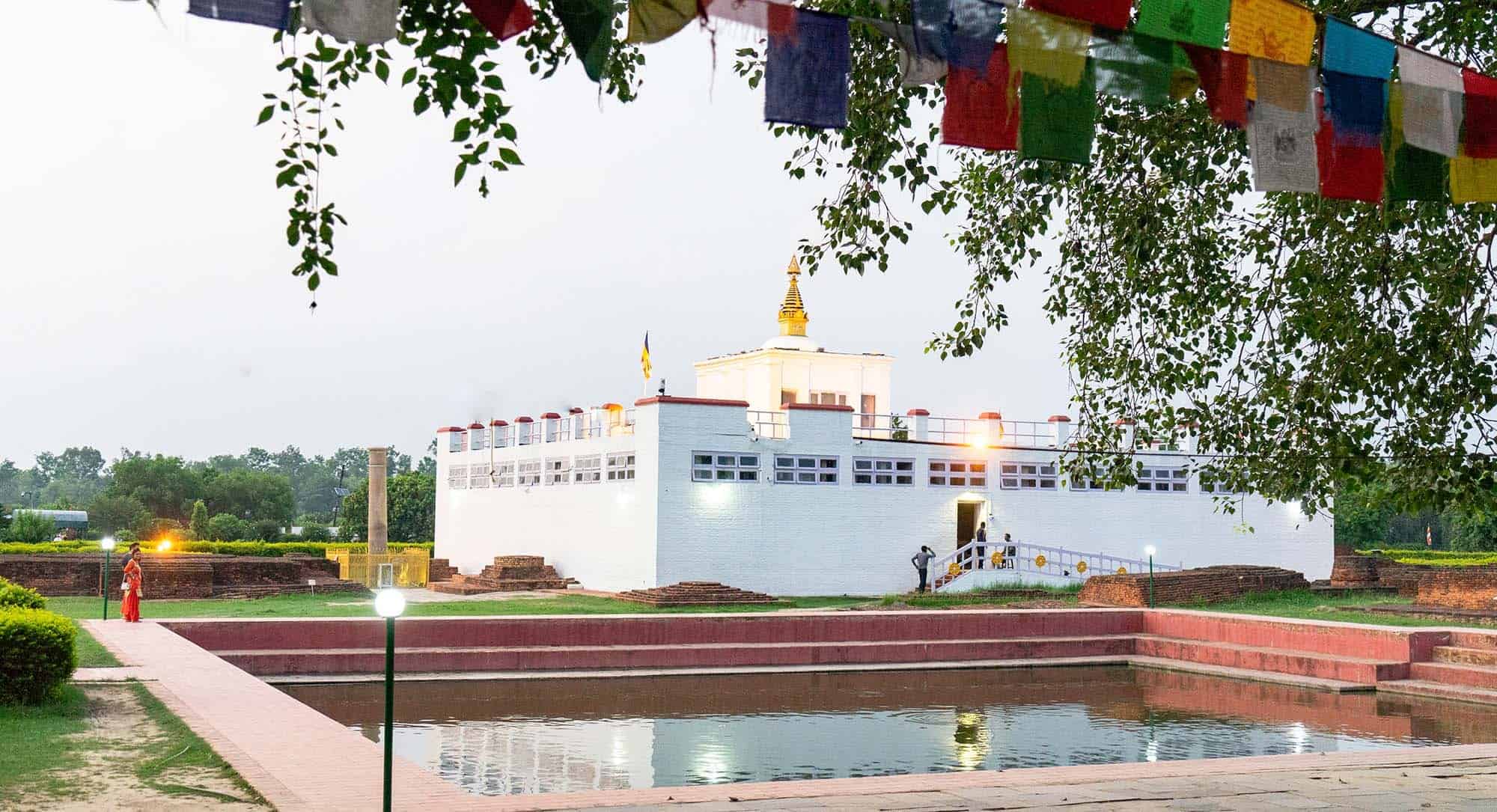 Lumbini is best known as the birthplace of Gautam Buddha, the Light of Asia. The place lies in the Rupandehi District of Nepal and is one of the most visited religious sites of the world. Lumbini was enlisted in the UNESCO World Heritage Site in 1997.

According to Buddhist mythology, Queen Mahamayadevi gave birth to Siddartha Gautama in 563 BCE. The prince later travelled to Bodh Gaya where he achieved enlightenment and became Buddha.

Lumbini is home to some ancient temples that are sacred to followers of Buddhism and Hinduism. The major attractions of Lumbini are the Mayadevi Temple, Ashok Pillar, Lumbini Garden, and Puskarini (Holy Pond).

The holy site also has several monasteries, monuments, and the Lumbini International Research Institute, funded by Buddhist organizations from around the world.

Situated in the Langtang National Park, Gosiakunda or Holy Lake is a Hindu religious site and a popular trekking destination. It is famous as the home of Lord Shiva and Goddess Gauri.

Mahabharata, Ramayana, Vishnu Purana, and Bhagwat Purana describe the origin of Gosaikunda during the time of Samundra Manthan when Shiva came to drench his thirst after drinking the Kalakuta poison.

The God of Destruction plunged his Trishula into the mountain to draw water after drinking the vicious poison.

The water from the lake is the major source of the Trishuli river.

It is a sacred Hindu temple that lies on the foot of the Thorong La Mountain pass in Mustang, Nepal. The temple lies at an altitude of 3,800 m and is the world’s highest temples. This temple of Vishnu lies in the 106th position of the total 108 Divya Desam listed by Sri Vaishnava sect.

The temple is also sacred to Buddhists who call it Chumig Gyatsa, which means Hundred Waters, referring the 108 freshwater taps in the temple.

Several pilgrim goers visit this holy place to take a bath in the freshwater taps.

Situated in the Gorkha district of Nepal, Manakamana Temple is committed to Goddess Bhagwati, an embodiment of Goddess Parvati. The word Mankamana can be broken down into two words; Mana, meaning heart and Kamana, which means wish or grants.

Rumor has it that Goddess Manakamana fulfills the wishes of her devotees who make a yatra to the holy shrine.

The Manakamana Temple lies 12 km away from the main town of Gorkha at the height of 1,302 m (4,272 ft) above sea level. It lies about 140 km away from Thankot, located on the outskirts of Kathmandu. After a drive to Kurintar we board a cable car which then takes us to the temple premises.

Every day hundreds of devotees visit the Manakamana Temple via a small 2.8km cable car ride from Kuringtar.

It is a famous holy site situated at the intersection of the Krishna Gandaki River and the Seti Gandaki River. The word Ghat means a crematory site and Devghat is considered as one of the holiest places in Hindu mythology for a person’s last holy rituals.

The holy place is best known for the Valmiki Ashram, where the famous Hindu author Valmiki had retired. Other attractions of the site are the Triveni Temple, the Someswar Kalika Temple, the Pandavanag fort, and Kabilaspur fort.

It lies 7.3 km away from Narayangarh and 12 km from Sauraha. The Maghey Sankranti festival that falls in January is celebrated here.

It is a sacred Hindu temple in the Baglung District, Nepal, that sits on the banks of Kali Gandaki River. The temple has the statue of Goddess Kali or Kalika and the the main temple courtyard can be approached by four entrances.

The temple is filled with worshippers during Chaite-Dashain, a festival that lies in the month of Chaitra, and in Bada Dashain. The temple premises are lit with oil lamps, and visitors perform poojas and other rituals.

Kalika Bhagwati Temple was built by Pratap Narayan Singh Malla while returning from his marriage with King Manimukunda Sen’s daughter.

Located in Taplejung district in the eastern Himalayan region of Nepal, Pathibhara Devi Temple is one of the ancient sacred Hindu temples.

The temple itself is located at the height of 3,794 m (12,444.32 ft) above sea level and serves as a secondary route to the Kanchenjunga Trek.

Pilgrims from Nepal and India visit Pathibhara Devi Temple during religious festivals and occasions. It is believed that the Goddess grants everybody’s desires that come to visit her holy abode.

Like Muktinath, the temple is sacred to both Hindus and Buddhists. Pathbhara Devi Temple is covered in snow during January and February, which attracts more visitors.

The famous Badimalika Temple lies in the Bajura district of Nepal. This Hindu temple is committed to the worship of Goddess Bhagwati and is served by priests from two districts; Bajura and Kalikot.

Hindus visit the temple at the height of 4,200 m during Malika Chaturdashi, a significant festival that is celebrated during the month of Bhadra.

Badimalika is also popular amongst hikers who call it Adventure in the Grasslands. The place was currently enlisted as a trekking trail and promoted by TAAN (Trekking Agencies’ Association of Nepal) .

Popularly known as Dolaka Bhmisen, the Bhimeshwar temple lies in the Dolakha district, Nepal. The roofless temple is home to a Shiva Ling and Bhimeswaar, a major deity in Dolakha.

The hilltop complex lies in the Pyuthan district of Nepal and is built in honour of the sacred role of cows in Hindu culture. It was founded during 1941 by Swami Hamsananda who got the land from the landlord of Pyuthan.

Swargadwari is filled with worshippers from Nepal and India during the festivals of Baisakh Purnima in April and Kartik Purnima in October.

This temple lies in the western part of Nepal in the Baitadi district. The temple can be reached after an hour-long jeep ride from the Dasharath Chand Highway.

Although the place is rich in vegetation and freshwater resources, followed by the deepest cave in Asia, it is still yet to be recognized as a site of national tourism in Nepal.

A place of religious value to the Hindus, Khaptad Baba Ashram lies close to the park headquarters in the Khaptad National Park. The ashram is located far-western part of Nepal and is believed to have been resided by Khaptad Baba for five decades.

Swami Sachchidananda or Khaptad Baba was a spiritual saint who wandered along the mountainous and hilly regions of Nepal passing through places like Illam, Kalinchowk, Swargadwari, and Mushikot. The holy man finally settled in Khaptad Valley in the 1940s where he started to worship and meditate.

The ashram is filled with devotees, during the full moon of July and August, who come to worship Lord Shiva.

Above are the list of top 15 holy places and temples in Nepal that you should visit in Nepal. Go through this blog and choose your best places.

Tigers in Nepal: Species of Tiger in Nepal | Tiger population in Nepal

The Weather of Nepal in June

Nearby Resorts in Kathmandu

Tigers in Nepal: Species of Tiger in Nepal | Tiger population...

The Weather of Nepal in June

Nearby Resorts in Kathmandu