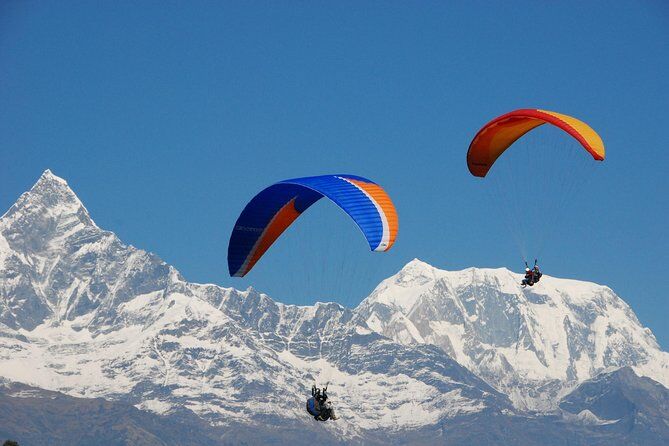 Paragliding can be a fulfilling experience for the thrill seeker in Nepal, and a ride can take you over some of the best scenery in the world. The paragliding season starts from November to February, with November and December being the best months for the flight. If you are searching best places for paragliding then, Pokhara is the go-to place. Along with the best view of the nature, the paragliding companies in Pokhara also ensures the safety of the people.

As of 2019, Pokhara is considered as one of the world’s top 5 commercial paragliding locations with all the right qualities such as comfortable thermal pools, smooth take-off and landing areas, the security of a wide lake and stunning mountain views. Paragliding in Pokhara can be the best decision you make in your life so, without any further ado fasten the seatbelt and fly to Nepal.

Yes, paragliding indeed takes place in Pokhara along with other cities of Nepal. The flight lunches from the Sarangkot which is a hill station. It takes around 20 minutes while driving to reach Sanrankot, hill station which is above the lakeside. As a matter of fact, Sarangkot is at an altitude of 1600 m from the sea level from where you get to see the breathtaking panorama of Dhaulagiri, Annapurna, and Manaslu by using the thermal baths.

Some of the best paragliding companies situated in Pokhara are:

The Blue Sky Paragliding Company provides the best service at a very affordable cost. Along with paragliding, they have other different packages for tourist trying to visit new places in Nepal. Blue Sky was established in 2001 by Nepal’s first pilot Narayan Parajulie and David Arrufat, who is a Swiss pilot. Pilot Arrufat is famous for its acro-level.

Together both Narayn Parajuli and Arrufat brought up the will to offer paragliding tandem courses in Nepal. Altogether, the company compromise of 7 to 10 members with very good experiences. As for now, blue sky Paragliding Company in Pokhara is well established and is considered as one of the safest paragliding company of Nepal.

The Managing director of the company Rajesh Bomjan is Nepal’s first-ever paragliding pilot. Likewise, Tandem pilot Trisha Bomjan is the first female to fly paragliding in Nepal. Not to forget, the other pilot, Binod Bomjan, is the two times paragliding champion of Nepal. With a highly qualified pilot, this company ensures the safety of each and every client. With more than six pilots, the company is never in short of a pilot for you. So, without delay, if you want to experience the thrilling experience of paragliding in Pokhara, we suggest you book your next flight to Nepal.

Nepal Trek Adventure and Expedition is also one of the oldest company which provides best service in trekking and paragliding without any compromise. NTA is a government registered travel agency that is accredited by the Nepal Association of Trekking Agencies. Nepal Trek Adventure paragliding is a customer-oriented company founded in 2006 with the sole aim of “Satisfied Customer Our Property.” Since then, the organization has provided thousands of tourists with a wide range of trekking and tour services of paragliding in Pokhara.

NTA has a team of skilled, committed and passionate people working around the clock to make your vacation package fun, precious and safe during the stay at Pokhara. Over 20 qualified trekking guides and about ten tour guides are available in the organization. Along with paragliding, Nepal Trek Adventure also provides other adventurous activities such as expedition, hiking, tours, sight-seeing, safari and many more.

As per the Trip Advisor, Nepal Trek Adventure is mentioned as the most popular travel porch in Pokhara. The international and national reviews about this company are also very positive. Along the line, the company also has a 98% success paragliding rate, which is pretty high in the tourism industry in Nepal.

Along with the fantastic views of snow-capped mountains and lakes, the clients will get to feel the nature from closer proximity while paragliding in Pokhara via this company. Similarly, the company has altogether six flying instructors and the main office is in lakeside (7 + years experienced) followed by other operating staff and comfortable vans.

As per the information, the company charges 11,335.30 for the paragliding. Likewise, the reviews, provided by the people, Fly Nirvana is one of Nepal’s most affordable and excellent service provider. People also talked about the safety and comfort that the agency arranged.

Last but not least Hanuman paragliding is another flying agency that provides excellent service for the adventure seeker in Pokhara valley. The company offers a unique adventurous experience to everyone who loves to fly high up in the sky to experience a magnificent view of the snow-capped mountain, Phewa lake and villages.

Hanuman paragliding in Pokhara is a registered company which is working under the Civil Aviation Authority of Nepal. Along with paragliding, this company provides other activities as well such as hiking, tour, safari and so on inside Pokhara valley.

Well, almost all the companies providing adventure package have much the same prices, only certain things can really fluxate the pricing depending upon the facility provided by the co-operation. Many businesses company in Pokhara Nepal have pilots from Nepal, while others have pilots from abroad; some have older equipment, some new gear, some have hotel facilities while other’s don’t. The small advanced factor makes a change in pricing; otherwise, the cost is quite similar for paragliding in Pokhara.

The other factor that makes a difference in cost is the type of flight that the client prefers. There are usually two types of flight, such as Tandem flight and Solo flight for paragliding.

Tandem Flight: Many people prefer tandem flight for paragliding. Tandem is the kind of flight where you do not flight alone, as you will get to enjoy the scenic beauty along with a paragliding pilot. The cost for this paragliding is around $90 per 30 min and $140 per 60 min.

Solo Flight: If you are eligible and have the experience, you can travel yourself. Before going for a solo flight, consent from the Pokhara Aviation Office is essential; they will let you book your flight just in $70 which is pretty low compared to Tandem flight. Likewise, for a solo flight, you need to get training from the concerned field.

As for the ticket, you can book online as well as visit the travelling agency in Pokhara. Most of the travel agency also provides a discount to certain percent if you pre-book online for paragliding in Pokhara.

Some of the agencies that offer online paragliding booking in Pokhara are:

During an adventurous tour, insurance is the most. Nepal government highly recommends travel insurance before paragliding in Nepal. There are a various company that provides you with the facility of insurance before booking the flight to Nepal.