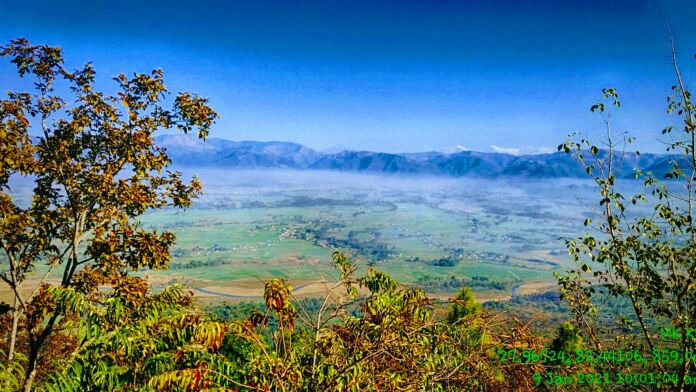 Dang District is located in Nepal’s Inner Terai area and is part of the Lumbini Province. The district’s Deukhuri valley, which is flanked by the Sivalik Hills and Mahabharata Range, is the province’s capital and Asia’s second-largest valley. The district headquarters of Dang is Ghorahi, Nepal’s sixth-largest city and largest sub-metropolitan city.

Tulsipur sub-metropolitan city, Dang’s second-largest city, is a crucial transportation hub with concrete highways and aircraft networks. The district has a population of 548,141 people and covers 2,955 km2 (2011 census).

The Dang area has been extensively investigated archaeologically since the nineteenth century, thanks to the discoveries of ancient ape and early human remains. The district is the epicentre of Nepal’s Sanskrit language. It is home to Nepal Sanskrit University, the country’s only Sanskrit university, and Rapti Academy of Health Sciences (RAHS), a government-owned medical college in Lumbini Province headed by the Prime Minister of Nepal.

The Dang Deukhuri district features many temples and gumbas dedicated to puranic legends like the Shaivism, Mahabharata, Shaktism, and Gorakhnath, making it one of its most important culturally diversified neighbourhoods.

Archaeologists believe the Churiya range is old with the finding of Sivapithecus (syn: Ramapithecus), a link between man and ape.

Since 1966, Tribhuvan University has been conducting prehistoric studies of Dang Valley, including a geological survey of the valley led by Robert M. West of the American Museum of Natural History and the Department of Mines with the involvement of His Majesty’s Government of Nepal from 1976, with the help of a palaeolithic study of Dang by Germany’s University of Erlangen-Nuremberg (Friedrich-Alexander-Universität).

According to these findings, Dang Valley was formerly a lake between 2.5 and 1 million years ago. Between 1984 and 1986, Gudrun Corvinus, a German academic who specialized in the Pleistocene-Holocene period of early human occupation, studied the stratigraphy and geology of Dang valley. She examined the exposed section of the road that connects Koilabas and the Dang Valley in Deukhuri.

Hand axes and other artifacts dating from the early Paleolithic (1.8 million to 100,000 years ago) have been unearthed in alluvial layers along the Babai River in Dang Valley. These are Acheulean, or second-generation’ toolmakers, who came after the very first Olduwan.

Archaeological sites from the Upper Paleolithic and Late Pleistocene periods are more recent (about 50,000 to 10,000 years ago). These can also be found near and south of Dang Valley, along the Babai and Deukhuri Valleys (Rapti River). These are Acheulean, or second-generation’ toolmakers, who came after the very first Olduwan.

The indigenous Tharu people have lived in Dang Valley from ancient times, but the exact creation date is still under inquiry. The valley was a bustling hub of Tharu civilisation, according to academics.

The Tharus are one of Nepal’s most important indigenous ethnic groups in current times, and the Tharus that live in Dang valley is known as Dangaura Tharus. The latter has managed to keep their colourful and distinct traditional culture alive and well.

The Tharus are one of Nepal’s most important indigenous ethnic groups in current times, and the Tharus that live in Dang valley is known as Dangaura Tharus. The latter has managed to keep their colourful and distinct traditional culture alive and well.

Meghraj Singh Chauhan belonging to the Chauhan dynasty, was the king of the region from 1350 AD onwards, according to Yogi Ratna Nath’s Chaughera monastery in Dang valley, the third-in-line line of Yogi Gorakhnath.

For the lords of the valley, the temple had an immense spiritual significance. For hundreds of years, the temple’s interior functions remained substantially unchanged even after new dynasties came to power. According to Nevills Gazetteer of Bahreich, Dangdun was under the dominion of Udat Singh in 1485 AD (1922:124).

Nawal Singh Chauhan, the last independent monarch, ruled as the House of Tulsipur from Chaughera of Dang till 1760 AD, controlling one of the largest Taluqs of Oudh, India, at the time, which included the Dang and Deukhuri Valleys.

The town shares its name with Tulsipur, a city in Nepal’s Dang Deukhuri District (65 kilometres north); the two municipalities are historically linked because they both had the same king.

Because it was higher, hotter, better-drained, and thus less malarial than most Inner Terai valleys in Nepal, Shah and Rana courtiers and other Nepalese chose Dang as their home. Deukhuri was more of a Tharu neighbourhood until DDT was introduced in the 1950s to inhibit the disease-carrying Anopheles mosquito.

Before the Rapti Bridge was completed, Koilabas in Dang Valley was an important trading station with India, but it was eventually abandoned. The ruins of Koilabas still contain remains of the Persian Mughal Empire’s architecture. A long time ago, Dang was the capital of Rapti Zone.

This region comprises the greater easterly and upstream sections of the parallel Inner Terai valleys of Dang and Deukhuri and the encircling ranges of hills and mountains. Both valleys meet downstream in Banke District.

The district borders Uttar Pradesh, an Indian state that borders Nepal, to the south—specifically, the Awadh districts of Balarampur and Shravasti. Because the international boundary parallels the southern edge of the outermost Siwalik foothills known as the Dudhwa Range, no Outer Terai expands onto the main Ganges Plain within this district. The permeable geology of the Siwaliks limits moisture retention and soil growth. Hence they are covered in barren scrub forest.

The Dudhwas rise abruptly to a high of roughly 700 meters, then descend gently into the Deukhuri Valley, reaching its lowest point of 250 meters close to the Rapti River. Because the Dudhwas were more than 100 kilometres long, the Rapti had to detour west before turning southeast to follow the primary trend of the plains into India.

Deukhuri enjoys a subtropical climate, is well-watered by the river, and has ample groundwater. The Dang Range rises to 1,000 meters north of Deukhuri Valley, passing through at around 700 meters. The Dang Valley, located north of these hills, is drained by the Babai River, a tributary of the Ghaghara (Karnali).

At the foothills of the Mahabharat Range, the Babai Valley is 600 meters high, with alluvial slopes gradually expanding northward to 700 meters. The area then continues upslope for another 1,500 to 1,700 meters to the Mahabharats’ crest. To the north are the districts of Pyuthan, Rolpa, and Salyan.

For the most part, the Rapti River in western Nepal flows through the lower Dang valley. On the northern side of the hills, it passes beneath the Churia range before leaving on the southern side. Nepal’s second-longest bridge spans the Rapti river, connecting Sisahaniya in Rapti Rural Municipality and Mahadeva in Gadawa Rural Municipality in Dang district.

Dang Valley has a rich cultural heritage that includes a mix of Hinduism and a previous Tharu culture. The Dang Deukhuri district features many temples and gumbas dedicated to puranic legends like the Mahabharata, Shaktism, Shaivism, and Gorakhnath, making it one of its most important culturally diversified neighbourhoods.

Some of the most notable tourist heritage sites in the Dang Deukhuri District are as follows:

The temple emerged as a result of Satidevi’s right ear falling off, according to Hinduism’s Swasthani Purana. This temple is the most well-known Shaktipeeth in Dang Valley.

Dharapani Temple is about 9 kilometres from Ghorahi’s centre, in the district’s Dharna municipality-01, at the base of the Chure mountain, south of the Babai River. On their way to Uttarapantha, the five Pandavas brothers sat and chanted Shiva prayers at this temple (Himalayas).

One of the valley’s most prominent tourist attractions is the temple, which houses the world’s largest Trishula. Hindu worshippers and prominent Nepalese leaders such as the President, police chiefs, top judges, and politicians have visited the shrine.

The Ratnanath (Gorakhnath) Mandir is located in Chaughera’s Ghorahi sub-metropolitan city. The Dang District is a renowned tourist and spiritual site. The shrine is named after Yogi Ratna Nath, Yogi Gorakhnath’s third-in-line.

The temple has had a significant spiritual value for the rulers of the valley from ancient times; as a result, the temple’s internal operations were almost entirely undisturbed for hundreds of years, even after power passed to new dynasties.

ALSO READ :  The Weather of Nepal in May

The monastery’s funding is tied to the valley’s rulers, as legend tells of a king who went jungle hunting and saw a splendid deer and shot it with an arrow. The king followed after the injured deer, which escaped into the woods. Then, in the middle of the forest, he met a dazzling ascetic who sat in profound concentration, an arrow in front of him.

The king admitted his mistake and apologized. The Siddha forgave him and granted him the power to dominate the Dang Valley through yogic strength. “As long as you retain the arrow, you will keep your kingdom steadfast,” Yogi Gorakhnath’s follower Ratannath told the monarch as he handed over the arrow.

After that, the king began to worship Ratannath, and the king’s bloodline has done so for the past six months, keeping the arrow. For the remaining six months, the Yogis worshipped the arrow, and the monarch was forced to pay them half of his kingdom’s earnings.” 516 Narharinath, 2022 (summarized from Narharinath 2022: 516).

Barhakune Daha, sometimes spelt Baraha Chhetra, is a sub-metropolitan city 3 kilometres north of Ghorahi. This region is dedicated to the Hindu God Vishnu, widely respected during the Makar Sankranti holiday. The temple’s name comes from the twelve “bara” (Nepali) corners of a pond that surrounds it.

Chameri cave, also known as the “Siddha” cave, is located on the Mahabharat range’s slopes and is supposed to have been used by saints for penance in the valley. Since prehistoric humans may have used the cave, it has sparked an archaeological interest.

The cave is four levels high, with a vast ground hall that can accommodate a thousand people. The cave of Chameri is historically significant, and several preliminary observations and studies are underway.

Jakhera Lake is a lake in Dang’s Lamai Municipality-5, about 35 kilometres from Ghorahi; two Ganesh and Siddeswor Mahadev temples surround that. The lake is a prominent tourist attraction in the neighbourhood, and it’s a terrific spot for sightseeing and picnicking. The lake, which is 6 feet deep and 12 hectares in size, is located at the foot of the Chure mountains.

The Deukhuri Valley is traversed by the East-West Route, Nepal’s principal east-west route, which passes via Kalakate and Bhalubang Bazar on the upper end and Lamahi on the lower back. Branch roads run up the Rapti River into the Pyuthan and Rolpa districts from Bhalubang.

Highways run north through the Dang Range to Ghorahi and south through the Dudhwas to Koilabas, an essential international commerce hub. The Banke and Kohalpur districts are connected by the East-West highway, which passes through Lamahi. Roads connect Ghorahi to the Rolpa district and the Swargadwari pilgrimage site.