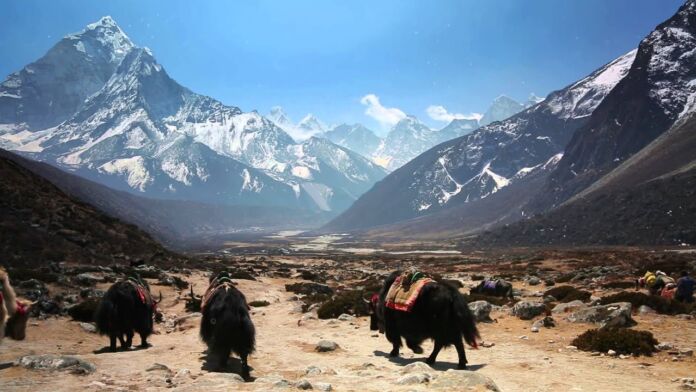 Whether be it mountaineering, mount viewing, or adventurous climbing, the first country that comes in your mind is Nepal, right? Nepal, throughout the world, is known as a country full of Mountains and Hills. There are altogether 1,310 peaks over 6000 meters above, 238 of which are already open for climbing. Likewise, in a world out of fourteen above 8000 m Tall Mountain, eight mountain are in Nepal.
The country’s geographical disparity ranges from snowy mountain peaks reaching the sky with elevations ranging from 5,357 meters from Gokyo RI to Mount Everest’s 8,848 meters to Mustang’s hot, arid, and corroding desert-like landscape with ash-like cliffs and enigmatic mountain caves. Among such disparity in the Mountains today, we are going to talk about the list of the famous mountains in Nepal.

If you want to know the detailed information about all these highest mountains of Nepal then, read this blog below. 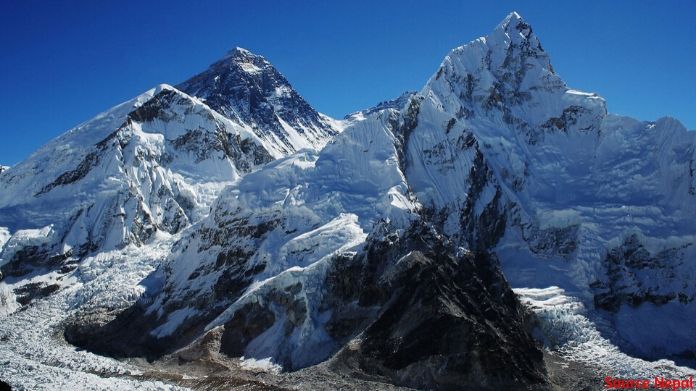 The Highest Mountain in the World

The interesting fact about Mount Everest- Mount Everest grows by 4 mm each year due to shifting tectonic plates.

The list of highest mountain doesn’t finish up without mentioning Mount Everest. Part of the Himalayan Mahalangur, Mount Everest, is situated in Nepal’s Khumbu zone, which was named after Sir Gorge Everest. The word ‘ Sagarmatha ‘ means ‘ the Head of the Sky. ‘It’s also called in ‘Chomolungma’ in Tibet.

A native of New Zealand, Sir Edmund Hillary, and Nepali mountaineer Tenzing Norgay Sherpa, who was his Nepali Sherpa companion, climbed Mount Everest for the first time on May 29, 1953. As for now, there are two access points to the top of Mount Everest, one from Nepal, and another is Tibet.

The Five Treasure of the Snow 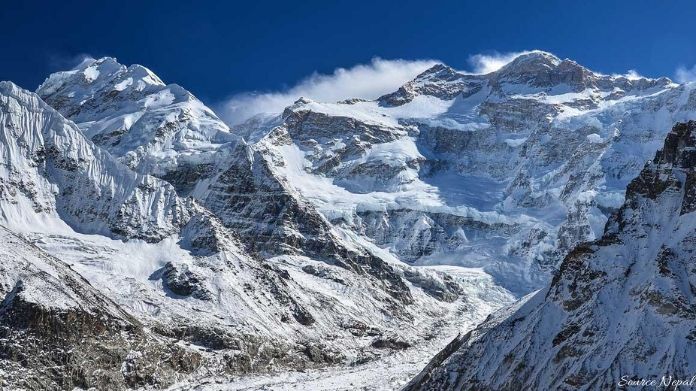 Interesting facts about Kanchenjunga– Before the discovery of Mount Everest, Mount Kanchenjunga was considered as the highest mountain in the world.

After Mount Everest and Mount K2, Kanchenjunga is the world’s third-highest mountain and second highest mountain of Nepal, which is situated approximately 125 kilometers southeast of Mount Everest. Sikkim, part of India, partly shares the mountain, but the major part of the mountain lies in Nepal. Joe Brown and Gorge Band climbed Kanchenjunga for the first time on May 25, 1995; both were part of a British expedition party.

The name of the mount was derived from the Tibetan language Kanchenjunga. It translates roughly into “five big snow repositories.” Famous Mountain is part of the Kanchenjunga Conservation Area.

Climbing Mount Kanchanjunga was tried for the first time in 1905, but in an avalanche, four members of that troop died. However, in honor of the local people’s belief, the successful British expedition set the standard by stopping a few feet short to the actual summit in 1955.

The Mountain Wall of Legends 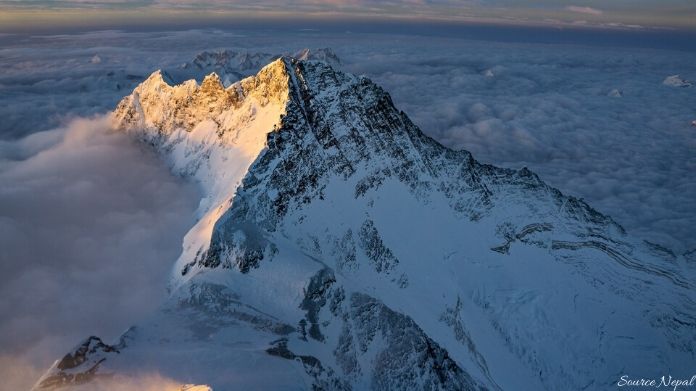 The interesting fact about Lhotse– The famous mountains in Nepal, Lhotse is occasionally mistaken as the Everest massif’s southern peak.

Famous Mountain, Lhotse is the world’s fourth-highest mountain and third highest mountains in Nepal and is part of Everest mountain range. The derivation of the name Lhotse comes from Tibet, which means “the South Peak.” Lhotse consists of three prominent peaks- the 8,516-meter main peak, the 8,414-meter elevated Lhotse North, and the 8,383-meter Lhotse Shar.

Third highest mountains of Nepal, Lhotse is a popular alternative to Mount Everest, sharing much of Everest’s route. It lies on the Tibet-Khumbu border and was first climbed in 1956 by the Swiss mountaineering and expedition team members Ernst Reiss and Fritz Luchsinger. 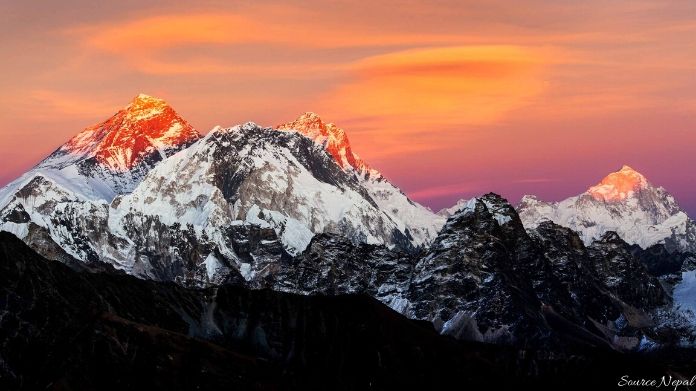 Interesting facts about Makalu- For its steep pitches and knife-edged ridges, the mountain is regarded as one of the most difficult to climb eight-thousanders Mountains in Nepal.

Among the list of highest mountains in Nepal, Mount Makalu is considered an isolated peak of Nepal, which lies in between Nepal and China acting as a border. Also, the mountain is14 miles (22 kilometers) southeast of Mount Everest. Rising from the ground, Makalu looks like a four-sided pyramid of snow and ice. The name of the mountain derives from a Sanskrit word “Maha Kala” after the Hindu God Shiva.

Later the famous mountain of Nepal translates into literal English as “the Great Black.”Lionel Terray and Jean Couzy, both members of a French expedition, climbed the mountain for the first time on May 15, 1955. 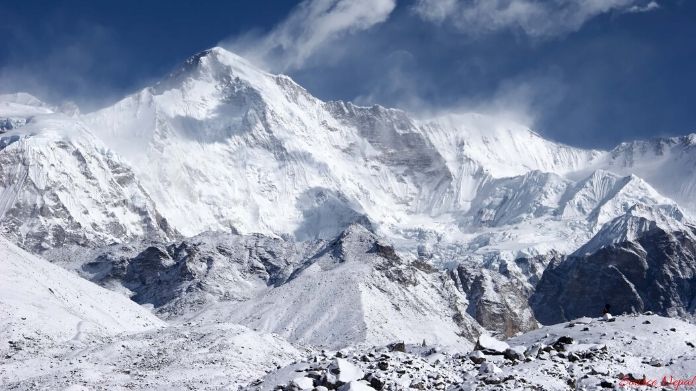 The interesting fact about Cho Oyu- Even though mount Cho Oyu has a very easy route it is one of the rarest climbed mountains in Nepal.

Another highest mountains of Nepal is Mount Cho Oyu and lies 20 kilometers west of Mount Everest. The interesting fact is the mountain is located between China and Nepal, which acts as a natural boundary between the two nations. The name of the mountain has Tibetan roots, and the word ‘ Cho Oyu ‘ means ‘ Turquoise Goddess, ‘ which due to its cerulean tincture, is quite appropriate to the mountain.

Joseph Jöchler, Herbert Tichy, and Sherpa Pasang Dawa Lama of an Austrian expedition climbed the mount for the first time on October 19, 1954. The mountain became almost famous as Everest due to its simple routes to the summit; however, it is the rarest climbed mountains in Nepal. As most of the tourists and mountaineers are inclined to climb highest mountain, Everest due to its repute as Highest Mountain of the world. 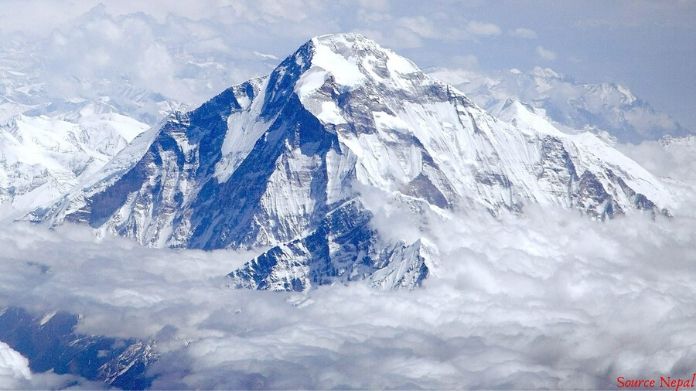 While listing the famous and highest mountains of Nepal, Dhaulagiri I is the seventh highest mountain in the world and fifth highest in Nepal. Part of the massif of Mount Dhaulagiri ranges from the Kali Gandaki River to Bheri. The mountain’s name comes from the combination of two Sanskrit words-” Dhwala, “meaning” majestic, green, and beautiful “and” Giri “meaning” mountain.

Isn’t it amazing that the height of Dhaulagiri I mountain also becomes visible from northern Bihar in India on fair weather and cloudless days? Members of the Swiss-Austrian expedition team – Kurt Diemberger, P. Diener, E. Forrer, A. Schelbert, NyimaDorje Sherpa, and NawangDorje Sherpa – climbed it for the first time on May 13, 1960.

The Mountain of Spirits 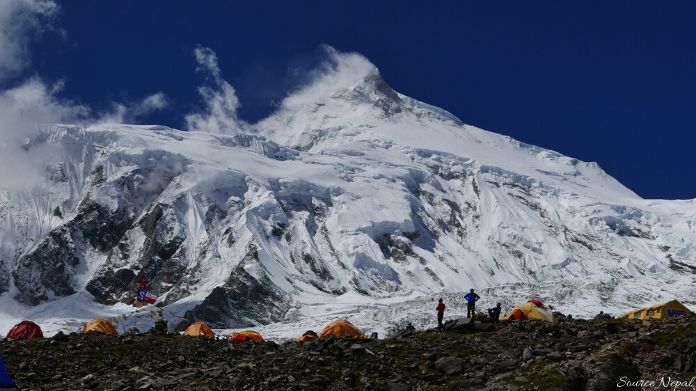 Among the highest mountains in Nepal, Mount Manaslu is the world’s eight-highest mountain and is part of the Himalayan Mansiri massif. Manaslu is often referred Tibet as the “Kutang” in Tibet and is best known as the “Spirit Peak.” The word ‘Manaslu’ derives from the Sanskrit word ‘Manasa,’ which means ‘ intellect ‘ or ‘soul.’

The famous mountain was first climbed in 1956 by Toshio Imanishi, ArturHajzer, and GyalzenNorbu. Similarly, Mount Manaslu is renowned for being a mountain close to the people of Japan. Likewise, the Nepalese government has allowed trekking in the Manaslu region since 1991.

The Goddess of the Harvest 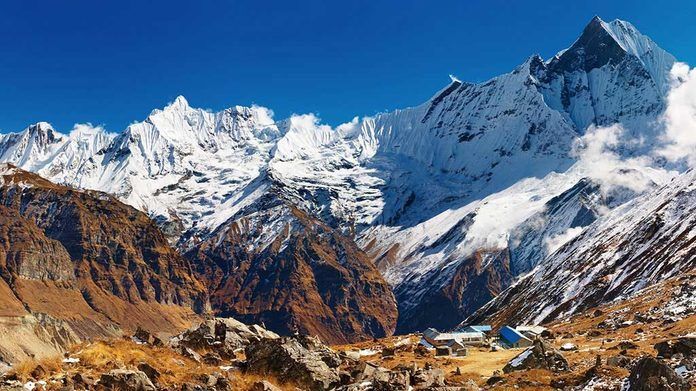 The interesting fact about Annapurna I- Kali Gandaki Gorge is the world’s deepest gorge and lies between Dhaulagiri and the Annapurna range.

Among the list of highest mountains in Nepal, Annapurna, the world’s tenth highest mountain is the part of mountain massif of Annapurna. Located in north-central Nepal, it includes one peak, which is more than 8,000 meters, 13 peaks above 7,000 meters, and 16, over 6,000 meters. The name of the mountain, Annapurna, is extracted from the Sanskrit name “Full of Food.” The famous mountain is also timely associated with Lakshmi, the Hindu goddess of good fortune and riches.

On October 8 and 9, 2013, Swiss climber Ueli Steck, one of the world’s most formidable alpinists, soloed the Lafaille route on the central and highest portion of Annapurna I face. The climb was his third attempt on the road, and the feat was called “one of the most impressive climbs in the history of the Himalayas.” 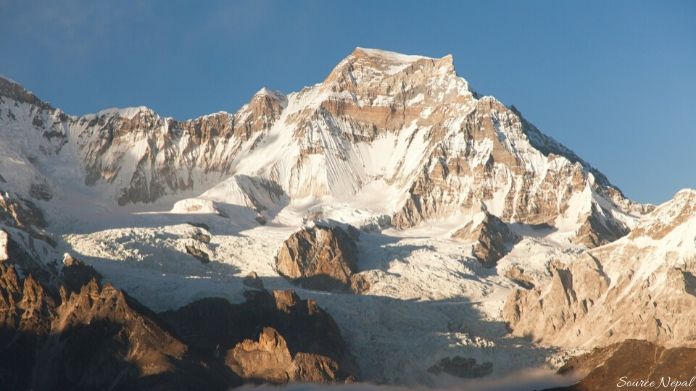 Ninth highest mount Gyachung lies in between Mount Cho Oyu and Mount Everest. It is the world’s fifteenth-highest peak and Nepal’s ninth highest peak. Yukihiki Kato, Kiyoto Sakaizawa, and PasangPhutar, who were all part of a Japanese expedition team, climbed the mountain of Nepal for the first time on April 10, 1964.

Gyachung Kang is the highest among the mountains of Nepal lying between Cho Oyu and Everest. Although it is one of the highest mountains in Nepal, the peak is barely climbed by any mountaineers. 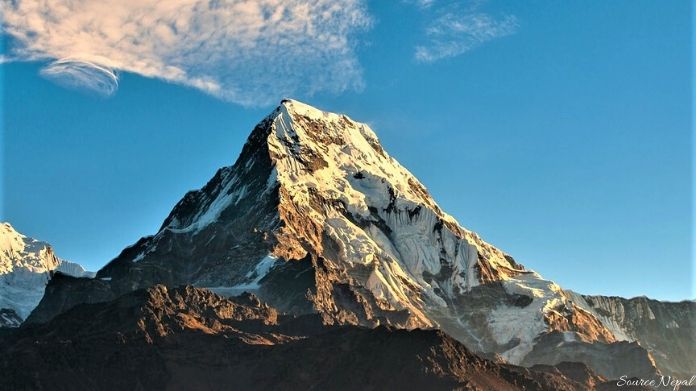 The interesting fact: It is the second tallest Nepal’s Mountain that lies in the category of “seven-thousander.”

Famous mountains of Nepal, the Annapurna II is situated on the easternmost side of Himalayan range and is the part of the Annapurna mountain massif. A British / Indian / Nepali expedition team first climbed it on May 17, 1960.

In the same way, one of the highest mountains of Nepal, Annapurna II is the Annapurna Himalayan range’s second-highest peak and can be seen from the Pokhara valley. There were very few Annapurna II expeditions and climbs, mainly due to the steep and dangerous pathway of mountains in Nepal.

For a fact, Mount Everest has been a great source of income and Nepal’s largest revenue generator in the business of tourism and trekking. The fact that Everest is the world’s highest mountain peak has made the Everest region the country’s most sought-after trekking location.

Nepal has immense topographical complexity for a relatively small country and offers impressive geographical characteristics in the range of only 230 kilometres from north to south. This is one of the reasons why Nepal is the preferable holiday and adventurous destination for the tourist from the whole wide world.

View the Video of Top 10 Tallest Mountains in Nepal