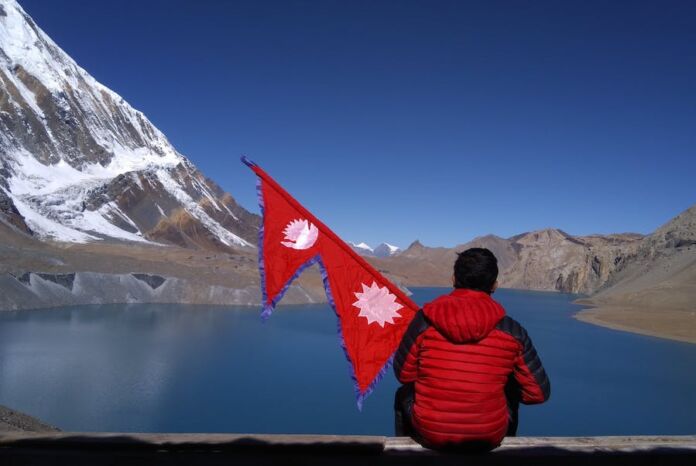 Contents hide
1. National Flag of Nepal
2. Introduction to Flag of Nepal
3. What is the History of Nepal’s flag?
4. What is The Meaning of Different Symbols in Flag of Nepal?
5. What is the reason behind the Triangle shaped Flag and its color?
6. What do National Flags Stand For?
7. Is Nepal’s Flag Considered as a Most Mathematical Flag in existence?
8. Nepal Flag: World Largest Human flag

Introduction to Flag of Nepal

There are various myths and historical stories that are conveyed generation to generation about the colorful National flag of Nepal. Today, here we are going to provide you all the detailed information about the origin of Nepal’s Flag.

You must be aware of the fact that Nepal is the only country that has two overlapping red triangles with a large blue border. The flag of Nepal is officially adopted on December 16, 1962, with the original traditional design used in the 19th and 20th centuries. The concept of the flag only started after the unification of small states by the late king Prithvi Narayan Shah.

With the unique flag shape and the representing National flag, Nepalese has actually earned a distinctive identity in the world mass. Talking about the design of the flag, the blue border on the flag means peace and harmony. Similarly, the crimson color gives the meaning of the national color of Nepal along with the bravery of Nepalese people. As for two triangles, they represent the Himalayas. Additionally, the depiction of celestial bodies appears for permanence and the lasting of Nepal as the sun and the moon.

As we all know, Flag is the identity of the country. Yet, most of the country have the same shape rectangular face flag with different symbols, which are likely to confuse the native of other countries. However, in the context of Nepal’s flag, the scenario is quite different due to its uniqueness and shape.

What is the History of Nepal’s flag?

After stepping in the modern days gradually, the meaning of the national flag has changed. Moving into the historical meaning of Nepal’s flag, the moon of the flag was represented as the royal family during 1962, whereas the sun represents the family of Rana.

However, after 1962, the meaning changed with the belief that Nepal will remain until the moon and the sun exists in the world. The moon on the flag of Nepal also represents the calm and smooth nature of the Nepalese people, while the sun represents the heat and high temperature of the lower part of Nepal called Terai.

There might be very few people who know that along with the change in the meaning of the flag, Nepal’s flag also changed its appearance. Before 1962, the flag of Nepal contained the face representing the sun and the moon. Eventually, along with the meaning, the government changes its appearance as well. Current Nepal’s flag was redesigned in 1962.

What is The Meaning of Different Symbols in Flag of Nepal?

As mentioned above, every country has its own history when it comes to flags, so does Nepal. The shape color, and symbol of Nepal’s flag totally differs from any other flags from around the globe.

Unlike the usual trend of a rectangle-shaped flag, Neal’s flag has included two triangle shapes. The upper triangle of the flag contains a white half-moon, and the lager triangle contains the 12 pointed suns. According to the Hindu religion, the 12 pointed sun on the national flag represents the DEV or God among the five Gods or the panchadev. It also represents the 12 zodiac signs and 12 months of the year.

ALSO READ :  List of Gotra And Thari in Nepal

There is also an interesting fact that is defined in the flag of Nepal. The flag shape is believed as a symbol of Nepalese pagoda, which is mainly observed by Local Nepalese people. The triangle shape of the flag also represents the Himalayas in Nepal.

What is the reason behind the Triangle shaped Flag and its color?

As we know, the flag of Nepal is triangular shaped. But then going through the flags of other 194 countries, they are usual quadrilateral shaped. The unusual shape of the Nepali Flag might have raised the question to a huge mass of people from all around the world; however, it is very difficult to pinpoint the actual reason behind the shape of the flag. There is a various representation of shapes and colors of Nepal’s flag, but the exact reason is still the matter of mystery.

It is believed that during the era of flag molding, the trend of the rectangular-shaped flag was taking the hype. Yet, Nepal decided to keep the shape of the flag as it is, which is why Nepal got a unique shaped flag.

Nepal might have unique shapes when it comes to its flag, but it also has a significant reason behind the color. Diving deeper into the meaning of the flag, white color in the middle of the flag represents peace and harmony of the country.

The crimson red color represents the national flower of the Nepal Rhododendron and also a sign of the victory of the war. And moving towards the meaning of the blue line of the Nepal flag, the blue border contains the symbol of peace. The most interesting fact about Nepal is, it is the only country that has never been captured by any other country. So, Nepal does not celebrate the independent day.

ALSO READ :  The Weather of Nepal in April

What do National Flags Stand For?

A national flag is a symbol or representation of the country. The national flag of the respective country also holds great pride for the nation and its people. Since almost all the countries have a rectangular shape flag but Nepal, this actually turns the head of many foreigners visiting Nepal who is unaware of the fact.

Besides, the unique shape and size, the Nepali Flag also has a very deep meaning when it comes to the national flag. Similarly, the flag is not only the identity of the nation but also its people as well. Having an uncommon shape of the Flag has always been a matter of eyebrow-raising issues for the people of a different parts of the world.

Is Nepal’s Flag Considered as a Most Mathematical Flag in existence?

Yes, the details about the designer of Nepal’s flag are indeed close to non-existence, yet the person who designed flag of Nepal actually gave a masterpiece to the world. As the national flag of Nepal is considered the most mathematical existence flag.

It might sound like it is a very easy thing to draw the two triangles and the symbols, but there is an exact formula to make the national flag of Nepal. The formula to make a perfect Nepal flag is also mentioned in the constitution of Nepal, which is pretty great.

It’s true that the Nepalese people actually made a world record of the world’s largest human-made flag of Nepal. Over 35000 Nepalese people from different places gathered in the Tudikhel, Kathmandu, Nepal, to set the world record. The program was held on August 23, 2014.

Likewise, there are several attempts for the largest human flag that stood at 28,957 participants in the National Hockey Stadium in Lahore, Pakistan. But it was broken by India in with the involvement of more than 43 thousand people, the same year.