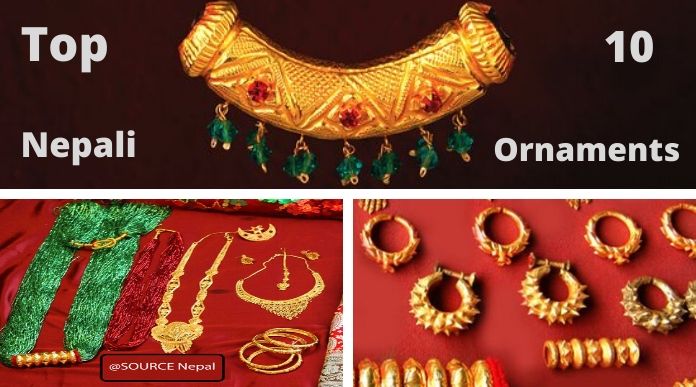 Along with traditional clothes, jewellery also plays a vital role in the reflection of people’s culture and belief. It is also a medium to communicate between different, culturally diversified people in the community. Mostly you will see a girl gracefully adorning the Nepali jewellery with their traditional attire. In the world mass, Nepal is particularly famous for the uses of heavy ornaments and jewellery. If you are curious to know all the detailed information about the famous Nepali Traditional Jewellery Ornaments then, we suggest you read the entire blogs as we have listed out all the Nepali Ornaments that are used in Traditional purpose.

How is Potte Mala Assembled?

Essentially, the Nepali traditional ornament Potte mala is made up of glass beads. Every glass bead is connected to a string with the help of hands, one by one. The potte’s are sometimes thinner multi-strand necklaces and sometimes long single-strand necklaces. The longevity of the neckpiece depends upon the needs and desire of the woman. Also, the chain is called ‘Tilhari’ if a gold pendant is attached to the Nepali traditional jewellery. The necklace is made up of seven beads of gold or silver arranged horizontally making a complete look of the potte.

Tayo necklace is one of the oldest necklaces of Nepal. The necklace is worn by women as well as deities in the Newar society. This Nepali ornament is regarded as the biggest piece of ethnic jewellery set. These traditional Nepali ornaments are made of high carat gold. However, traditional Nepali jewellery can also be made of golden copper or brass to make it affordable to all levels of people.

How is Traditional Nepali Ornament Tayo Made?

The Tayo’s main element is a hollow lozenge-shaped pendant with two mirror-image where comma shapes are attached to the bracelet, often paired with turquoise or coral. Likewise, the traditional ornament is made up of enchanted mantra inside the hollow. This piece of Nepali traditional jewellery is used in major ceremonies, including the ceremony of marriage. The enchanted amulet is placed in the Nepali ornament with the belief of good fortune.

How is Kantha made?

It consists of gold beads- round, fluted of barre;-shaped which is paired with red felt pads. The pads provide a striking contrast to the gold as it acts as a cushion between beads.

This piece is one of the oldest Nepali ornament. This Nepali traditional jewellery is made of gold or silver, with some precious stone attached and handcrafted with different textures. Previously, the traditional ornament’s design used to come in a square shape with a different animal print like fish, Kalash butterfly, which is considered a symbol of good luck.

How is Jantar assembled?

Jantar is also made with a paper where the Buddhist Monk or Brahmin Pandit writes all the secret mantras, and it is rolled and wrapped with a thin plastic tied to a thread. The primary purpose for people to wear Nepali traditional jewellery ornaments is to keep all the social evils away and empower them with spiritual strength that is scared myth in Nepali culture. In Nepali society, this traditional jewellery is considered as a very eye-catching ornament.

The traditional Nepali jewellery, which is pretty popular among Nepali woman is the Puli which is worn in the nose. Such traditional pieces of jewellery are either made of diamond or silver. In Nepal, people from other tribes wear nose jewellery except for women from the Newar and Tibetan-Nepalese community. It’s not just a piece of decoration item but also the traditional symbol of a married woman.

Moving onto Makashi, the bucket-shaped traditional Nepali ornament earring is used by a Newar farming community. Most of the Newars who wear Makashi with Haku Patasi (traditional dress) live in the Kathmandu Valley. That can be a silver or gold earring, which is worn daily.

Another piece of Nepali traditional jewellery is silver or gold Jun clip. Mostly the ornament is used as the head’s clip. It is made in the moon’s shape and also attached to the star. This traditional Nepali ornament is made up of various stones to decorate it.

In earlier days, the head clip was highly inspired by nature as it included various animals, birds and flowers on it. This main ornamental frame is made of silver and can be covered with a gold foil so all level people can afford it.

The Tharu women wear very valuable looking traditional necklaces. Many of the Nepali jewellery is big, heavy, worn with multiple layers. The har necklace is consisting of two large triangles hanging from a number of chains of increasing lengths. The increasing lengths make it heavy and eye-catching Nepali traditional ornament.

In the western region of Nepal, a fascinating defensive necklace is worn. The traditional Nepali ornament is called tengura and consists of bits of bone in the form of a phallus set into metal bezels. Many people believe that evil spirits will not rise to the head after wearing this traditional Nepali jewellery.

Tikma is one of the Newars prominent necklaces. Tikma consists of several metal plaques sewn on the fabric. Typically the material can be black, silk or velvet. The plaques are made of copper-plated along with silver and bronze.

Influence of Modern design over Traditional Ornament in Nepal

Almost all the cultural events are close to incomplete when it comes to Nepali tradition. From marriage ceremony to social events, people tend to wear various kinds of Nepali jewellery. For sure fashion keeps changing and replaces with new trends, same is the case when it comes to traditional Nepali ornament designing. The new design keeps taking the hype as per the significance and changing trends. The changing trends have influenced the design of jewellery in Nepal as well.

These days most of the people prefer a convenient small piece of Nepali jewellery set rather than a heavy set that is inconvenient to wear for a long time. Similarly, the frequent hiking price of the ornament also has pretty much influenced the rate of people buying traditional jewellery.

A World Heritage Site is an area that the United Nations Educational, Scientific and Cultural Organization (UNESCO) selects for having historical, scientific,...
Read more