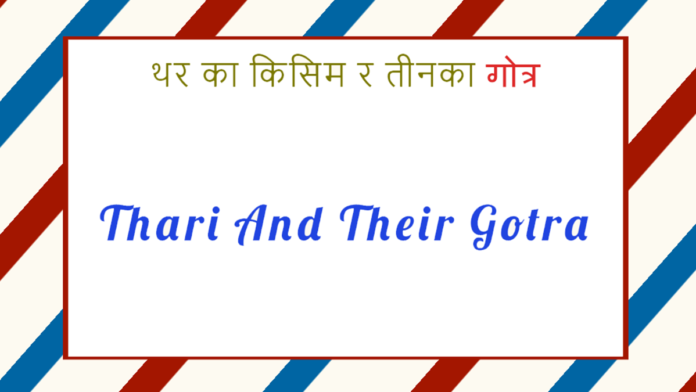 Before we delve into the list of Gotra and Thari in Nepal, let’s find out what each term means in Hindu culture.

It is a common belief that from Rishis who were the children of Brahma, eight gotras emerged. It includes the Seven sages- Saptarishis including Atri, Kashyapa, Vishwamitra, Vashista, Jamadagni, Bharadvaja, Gautama, and Agastya. Forty-nine sub gotras originated from the eight main gotras. Sources mention two hundred eighty-four Khas surnames exist as of today.

People with the same Gotra are Sagotri in Hindu society. Marriage among Sagotri people remains unacceptable to date. However, people have been disseminating information about the need to change this system. Moreover, there are concerns about Sagotri marriage practice not just culturally/ morally but from a scientific point of view as well.

What is Thari/ Caste?

When we look back to history, caste divides people into social groups based on their wealth, occupation, rank and race. It identifies people from a particular group, and it is a broader term which represents them—for example- Shrestha, Basnet, Luitel, Soni and so on. Usually, people from the same caste have the same Gotra. Note that it is not always true- there are few exceptions.

Given below is a list of Gotra and Thari in Nepal:

He symbolizes the Ursa Major or the Great bear along with the seven stars surrounding it.

The Sage Atreya is the person behind Atreya Gotra. Sage Atreya made significant accomplishments as a scholar in Ayurveda.

Agastya or Agasti is one of the Sapta Rishis in Vedic texts. He gained prominence as a scholar in different languages in the Indian subcontinent.

Dhungel is a surname in Agastya gotra.

Angira was a Vedic rishi known as the teacher of divine knowledge.

Basistha gotra came from Basistha rishi. He was the oldest Vedic Rishi and the teacher of the Hindu figure Ram.

Son of the rishi Atri, Bhardwaj is an honoured sage and among the Sapta Rishis. The Bhardwaj gotra came from him.

One of the most excellent Rishis, according to Hindu sacred texts, is Kaundinya after whom the Gotra Kaudinya received its name.

Kaushik is a popular patri-clan for the Brahmin and Kshatriya. People from Vishwamitra/ Kaushika gotra use this word as a surname too.

People with Gautam gotra have the following surnames

Mandabya was a great sage as per Hindu texts. He cursed Yama with mortality.

Another gotra Kashyap came to be from Rishi Kashyap.

The venerated sage in Hindu culture is behind the Bishwamitra gotra. He created the Gayatri Mantra.

Another revered Rishi in Hindu mythology is Vatsa after whom Vatsa gotra emerged.

The surnames with this gotra are Lamsal, Dahal, Kunwar, Rupakheti, Rana, Bhatta, Kharaal

Another sage as per Hindu sacred texts is Maudagalya.

The surnames which have Maudagalya gotra are Karki, Kuinkel, Upreti, Koirala, Simkhada, Timalsina.

We hope you found this list of Gotra and Thari in Nepal helpful.