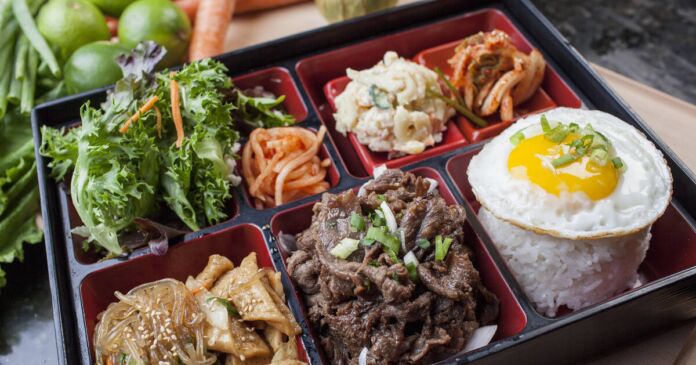 People were restricted to their houses as a result of the pandemic. The eating-out culture vanished overnight in Nepal during the lockdown. It is now gradually making a comeback. And, owing to valley residents, business is picking up in Korean restaurants in Kathmandu as well.

Korean cuisine is one of the healthiest in the world, focusing on vegetables and meats prepared and without much oil—also a strong emphasis on the fermented vegetable kimchi, which non-Koreans can enjoy.

Korean cuisine is known for its variety and excellence, but its classics can’t compare to an uncommon variety when it comes to the splendour of flavour in all its forms and cooking techniques.

We have handpicked a few of the restaurants in Kathmandu, Nepal, that serve the best Korean dishes in the city. They are:

In 2015, Ilsoo Choi, a South Korean national, opened the Gangnam Galbi Restaurant near Kathmandu’s Narayanhiti Palace Museum. He had arrived in Nepal seven years ago and enjoyed it so much that he decided to stay and operate a restaurant.

The restaurant specializes in non-vegetarian cuisine; therefore, it’s primarily a meat eater’s paradise. The most popular entrees are chicken and pig BBQ, which range in price from Rs 400 – Rs 3,000. Customers can even prepare their BBQ.

There is enough parking for six four-wheelers and 20 motorcycles at any given moment. Soju, a Korean Raksi, and Makgeolli, a Korean Chhaang, are two of the Korean beverages accessible here.

Wide and open outdoor spaces with tables and chairs make up the seating arrangement. There is no discount; the price is set. Cash, credit/debit cards, Khalti, eSewa, and Fonepay, are all acceptable forms of payment. On a daily basis, 15 individuals frequent the restaurant; before the epidemic, the figure was higher than 40.

Note: Choi recommends chicken or pork BBQ, as well as Seafood Pajeon, a Korean-style pancake made with green onion and seafood.

Chij Man Gurung wanted to do something in his home nation after returning from South Korea in 2000. He founded the Hankook Sarang in Pokhara in 2002. In the tourist city at the time, there were only a few restaurants selling Korean cuisine.

His other reason for opening a Korean restaurant stems from his personal view that Korean cuisine is more clean and healthy than that of other countries. Gurung opened the eatery in Tangal, Kathmandu, in 2018.

Before the Covid-19 outbreak, Gurung used to sell Soju, a Korean beverage, but it no longer does. Customers instead get to try a unique Korean chhaang. You can sit on the floor or chairs. Outdoor seating is also accessible for those who enjoy the magnificent scenery. You can pay with cash, credit or debit cards, or both. On a daily basis, around 100 customers frequent the restaurant. Parking for 4-wheelers and 2-wheelers is available.

Note: Gurung advises newbies to Korean food, to begin with Bibimbap, a rice and vegetable mixture that is both “healthy and appetizing.”

Korean Kitchen Picnic, which opened in Thamel in 2002, also serves authentic Korean cuisine. The restaurant was started by a Korean photographer and his wife and was later passed over to the current Nepali proprietors.

Two of the four rooms are Korean-styled sitting rooms, while the other two have a chair-and-table setup. The restaurant offers no discount. Customers can pay using credit or debit cards in addition to cash.

The cost of food ranges from Rs 375 to Rs 1,850. Budget foods include ramen and kimbap, although pig barbeque is the most preferred. Although Korean beverages are no longer available, there are several Nepali substitutes. Both two-wheelers and four-wheelers can park in the shared parking lot.

Saan Sarang Korean Restaurant is located in Boudha, Kathmandu, and was founded roughly 11 years ago. The restaurant was founded by Ang Yangdu Sherpa as a compliment to her family’s trekking organization. Her clients wanted to try Korean cuisine, but there was none in the Boudha region then, so she decided to open one. She slowly managed to amuse the taste buds of the natives as well.

Sushi, pancakes, and kimbap are on the lower side, while seafood is on the more pricey side, with prices ranging from Rs 300 to Rs 1500. Pork BBQ, kimbap, and grilled fish are the most popular dishes. Parking is not an issue: both 4-wheelers and 2-wheelers can park outside or underground.

Tables and chairs are available for lounging on the first floor, while traditional floor cushions are available on the second floor. Soju and Korean chhaang are among the Korean beverages available. There is also a smoking garden outdoors.

Note: Ang Yangdu Sherpa suggests readers try the pork BBQ, which the guests can prepare for themselves.

Shuimter Korean Restaurant in Thamel, which first opened in 2002 but then closed and returned three and a half years ago, serves delectable Korean cuisine at a low price. Bijaya Yonzon, the owner, learned about Korean cuisine while working in Korea.

Yonzon previously sold Soju and Korean chhaang. These days, Soju isn’t available. Customers can sit on the floor or take a seat at one of the tables and chairs. The eatery has no outdoor seating and only accepts cash payments. The drawback of being in the busy Thamel is the scarcity of parking.

Contact: 9843095723
Address: Thamel, Kathmandu
Note: Pork and chicken BBQ are the most popular dishes on their menu.

Naturally, you want to have a delicious meal that will satiate everyone at your party. The way food texture affects us is similar to how the environment of a restaurant affects us. So, here in this article is a list of the top 5 Korean restaurants in terms of both food and atmosphere.

If we have missed to mention any of your favorite Kathmandu’s Korean eateries, then please let us know via comments in our comment section.

List Of Swimming Pools in Kathmandu, Lalitpur and Bhaktapur

We use cookies in order to give you the best possible experience on our website. By continuing to use this site, you agree to our use of cookies.
Accept