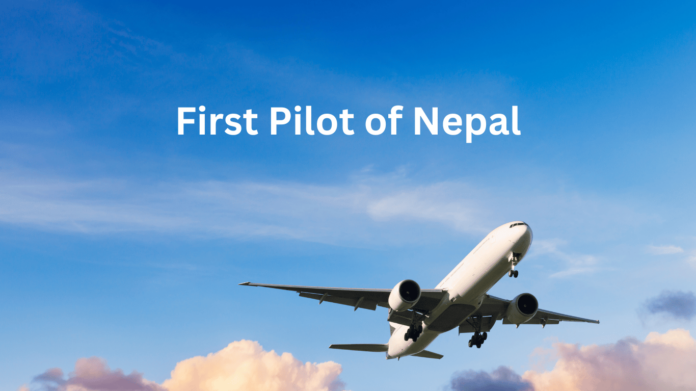 In this article, we are going to know about the First Nepali Male Pilot and the First Nepali Female Pilot. The aviation industry in Nepal has a long history, dating back to the 1950s when the first commercial flight was operated in the country. Nepal Airlines Corporation, the national flag carrier of Nepal, was established in 1958 and operated its first commercial flight in 1959. The airline initially operated a small fleet of aircraft and offered flights to several domestic destinations within Nepal, as well as to international destinations in India and Pakistan.

In recent years, the aviation industry in Nepal has continued to grow and expand. In addition to Nepal Airlines Corporation and the other domestic airlines, several international airlines now operate flights to and from Nepal, including China Southern Airlines, Qatar Airways, and Turkish Airlines.

However, the aviation industry in Nepal has also faced challenges in recent years. The country has a challenging topography, with a rugged and mountainous landscape that can make air travel difficult and expensive.

In addition, Nepal has a relatively small market, which has limited the growth of the aviation industry. In recent years, there have also been several high-profile accidents involving Nepali airlines, which have raised concerns about safety in the industry.

Despite these challenges, the aviation industry in Nepal remains an important part of the country’s economy and plays a vital role in connecting Nepal with the rest of the world.

To become a pilot in Nepal, individuals must meet certain requirements and undergo extensive training. This typically includes completing a bachelor’s degree in aviation or a related field, obtaining a private pilot license, and completing additional training to obtain a commercial pilot license. Pilots in Nepal must also pass medical and physical exams to ensure that they are fit to fly.

The idea of a Nepali woman becoming a pilot may have seemed far-fetched twenty years ago in Nepal, but Rakshya Rana never let that stop her from pursuing her dream of flying. Despite the challenges, she worked hard and eventually became Nepal’s first female pilot.

Rakshya Rana, who was born on November 7, 1967, to Ganga Rana and Noor Pratap JB Rana, had always dreamed of becoming a pilot, even though the idea of a Nepali woman becoming a pilot was seen as abnormal in Nepal twenty years ago.

As a teenager, Rakshya realized that the field of aviation in Nepal was largely untapped by women and made the decision to pursue a commercial pilot’s license. Despite the societal belief that women were not capable of succeeding in a field perceived as dangerous and male-dominated, Rakshya was determined to prove that women could be just as strong and capable as men.

She received her training from the Hoffman Pilot Center in Colorado for her private pilot license, and then completed the rest of her training in Addison, Dallas, Texas, obtaining her FAA commercial pilot license with multi-engine and instrument rating in April 1988. She eventually became Nepal’s first female pilot.

Rakshya received her private pilot license from the Hoffman Pilot Center in Colorado and then completed the rest of her training in Dallas, Texas, obtaining her FAA commercial pilot license with multi-engine and instrument rating in April 1988. The process took her a total of 11 months. At the age of 24, she began flying professionally for the domestic airline Everest Air. Rakshya credits her parents for their unwavering support and encouragement, stating that “no difficulty can make any difference” with such supportive parents.

After flying with Everest Air for over a year, Rakshya decided to stop flying due to the challenging schedule and lack of quality time with her husband, who was also a pilot for Royal Nepal Airlines. They both realized that such a demanding lifestyle was not conducive to a healthy marriage and raising a family.

Rakshya is now a full-time wife and mother, taking care of her two children while her husband is often away on international flights. While she admits to sometimes missing flying, she has no regrets about her decision and is proud to have proven that women are just as capable as men in the field. She also notes that she never planned for a long-term career as a pilot.

Rakshya has proven herself to be a successful pilot, a devoted wife and mother, and a pioneer for women in Nepal who are breaking through traditional barriers by pursuing their dreams. Through her efforts, she has paved the way for the nine other female pilots in Nepal, including former Miss Nepal 1998, Niru Shrestha, who is the fifth female Nepali pilot. Rakshya’s achievements serve as an inspiration for women in Nepal and around the world to pursue their dreams and shatter societal expectations.