Most Popular Sports In Nepal 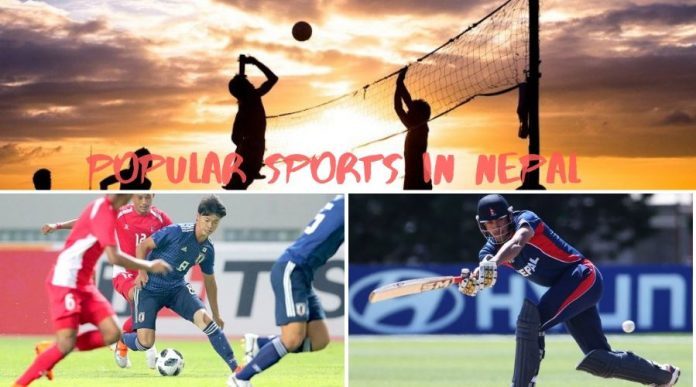 Which are the Popular Sports of Nepal?

Nepal accounts for a very long background of sports, from the Malla dynasty to the present. Today, sports are seen as forms of entertainment and respected as a profession. Initially taken as just a form of entertainment in Nepal, sports have been able to rise as a profession in present Nepal with significant growth and development at an international level.

Some of the popular sports in Nepal are Football, Cricket, Swimming, Volleyball, Dandi Biyo, Kho Kho, Kabaddi, Tennis, Martial Arts, Boxing, Wrestling, Running, Weightlifting, Basketball, Badminton, and Golf. The popularity and respect for sports in Nepal has grown in the present days added to the identity of Nepal.

For a long time, football has been popular in Nepal and acquires a large fan base. The All Nepal Football Association (ANFA) was established for the development and success of Football in Nepal.

The Ranas, during their rule in Nepal, introduced football to the country. The then prime minister Padam Shamsher started Ram Janaki tournament from the year 2004 which increased the public interest in the game. After the introduction to democracy in 2007, Nepal Police Force was able to get the hat-trick win of the tournament: Martyr’s Memorial League Tournament and handed over to ANFA. Today, there are a higher number of football clubs categorized as A Division, B Division, and C Division clubs.

Cricket is another popular game in Nepal which was introduced in the 1920s when the Ranas returned from studies in England and India. The Cricket Association of Nepal was formed in 1946 and funded by the Asian Cricket Council.

Cricket in Nepal has gained significant popularity in recent years with new generations of cricketers establishing themselves in the field. The Cricket Association of Nepal has become the part of National Sports Council. The playing season of Cricket in our country begins from September and ends in November and again begins in March and ends in May.

Volleyball is the national game of Nepal since May 23, 2017. Nepal Volleyball Association asked the government to make it as a national game giving reasons like less space required to play the game and economic feasibility.

It is a famous sport in Nepal played in every part of the country, including the hill, the Himalayas, and Terai regions. The government decision about making the Volleyball the national game is right as the small area is enough for playing the game.

Swimming is a solo or team sport requiring the use of the whole body to pass through water. The sport is played in swimming pools or open water (for example, in a lake or sea). In the Olympics, competitive swimming is one of the most popular games with diverse distance events in butterfly, backstroke, breaststroke, freestyle, and individual medley.

The Nepal Swimming Association looks after and organizes different events for professional swimming in Nepal. The popularity of this sport in Nepal has increased more in the present with professional swimmers setting new records for the country. For example, Gaurika Singh set the record of being the youngest participant in the Olympics in Swimming from Nepal at just the age of 13.

Boxing is a combat sport where two individuals, generally wearing safety gloves, throw punches at each other in a boxing ring for a predetermined period. Boxing is a popular sport in Nepal with a growing fan base. Nepal has won many international medals in boxing and improved significantly in the past few years making boxing one of the popular games in Nepal.

The Nepal Boxing Association supervises professional boxing in Nepal and works towards the improvement of this popular sport.

Martial arts are codified systems associated with fighting arts that have a certain poise and system to them. It can be used in military, fighting purposes, self-defense, competitions or for entertainment. Martial arts are mostly related to Asian fighting and have variations of different styles popular around the world.

Martial arts is a growing and popular sport in Nepal. The International Martial Arts Association (IMAA) governs martial sports in Nepal, providing instructions for kids, adolescents, and adolescents. The organization creates the proper atmosphere for learners who want to learn and for their martial art abilities to grow.

Some Popular Variations Of Martial Arts Performed in Nepal Are:

Tennis is a racket sport that can be played separately against one competitor (solo) or two groups of two (pairs) competitors each. Each participant uses a corded tennis racket to strike a hollow rubber ball coated with felt over or around a net and into the arena of the opponent.

The Nepal Tennis Association provides training and opportunity to players aspiring to play in higher levels. Tennis has gained a lot of recognition in recent years as one of the popular games in Nepal.

Dandi Biyo is a popular sport played in the rural areas of Nepal. It was regarded as Nepal’s national sport before Volleyball was formally proclaimed national game of Nepal on May 23, 2017. It is played around two or three meters long stick (Dandi) and about a seven inches long wooden pin (Biyo). A small stick with pointy ends represents the pin in Dandi Biyo.

Dandi Biyo is one of many games that were locally developed in the rural areas which reflect the use of local tools and techniques. While comparing with modern games, it is easier to understand when compared to Cricket. The major players can be compared to the “batsmen” and the other players to the “fielders.”

Kabaddi is one of the most famous games played in Nepal that originated in India and popular all around the world in the present day. Kabaddi is a sport of tag game performed between two seven-player squads. The aim of the game is for a single offense player, referred to as a “raider,” to run into the half of a court of the opposing team, tag as many of their defenders as possible, and return to their half of the court. This should be done all without being tackled by the defenders and in one breath.

In Nepal, it is played widely in rural areas and even professionally recently. This ancient sport represents a vast amount of our culture and heritage from centuries.

Kho kho is an ancient game created in India as a famous tag sport. Groups of twelve nominated players play it out of fifteen, nine of whom join the arena sitting on their knees (chasing squad) and three additional (guarding team) trying to prevent being struck by opponent squad members.

There are many famous sports in Nepal that are played actively in the present and also many that root back to a long time ago. We can say that sports in Nepal are growing and thriving in the present. Sports are great attractions for local people and tourists in a country. Finally, growth and victories in sports can bring a country with fame and glory. We must protect all the major and local games in Nepal.

Safety and Health Guide While Trekking in Nepal

Trekking is typically an enriching experience and a lifelong experience. Although trekking is not risky, it is always important to keep in mind about...
Read more
Sports

Every country has a unique profile that defines it, whether it be in the form of culture, festivals, religions, and practices or even sports....
Read more