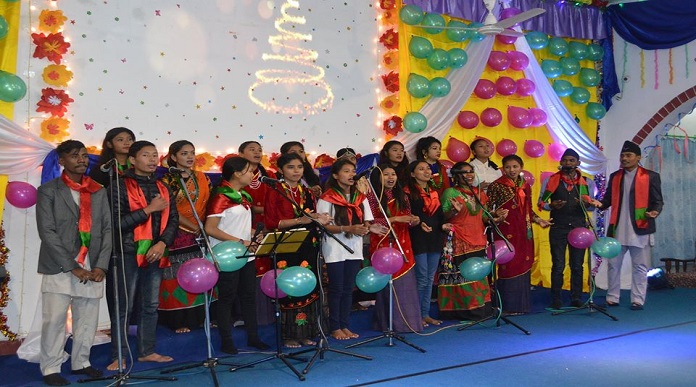 Nepal is one of the few countries which celebrates unity in diversity. The land where people worships cows, crows and dog also celebrates Christmas without hesitation. A country with around 80.0% Hindu, 10.74% Buddhist, 4.20% Muslim, 3.60% Kirant and 1.45% Christians celebrates all the festivals from different religions with equal enthusiasm. Most say Nepal’s makeup of faith is as peculiar as once upon a time it was a Hindu nation whereas as for now, it is a secular country.

Is Christmas a Public Holiday in Nepal?

Nepal’s Christian community observes Christmas Festival commemorate Jesus Christ’s conception, just like any Christians from the western world. Nepal was declared a secular country in 2007 and in April 2016 the Christmas was announced as a national holiday. The Ministry of Home Affairs (MoHA) proclaimed the day as a public holiday on December 24. But, due to the strong objection from the Christian community Nepal government has to announce the holiday on December 25.

How the Celebration of Christmas Differs from Past Days in Nepal?

The concept of celebrating Christmas is changing with time. A few years back, people tend to spend their Christmas holiday watching movies and completing their household activities like any normal weekends. Likewise, schools and colleges were closed for winter holidays during this time of the year, and many kids would be stuck to their TV sets in terms of Nepal.

However, the way of celebrating festivals other than Dashain and Tihar is slowly changing, and many other festivals are getting the hype in the Nepali society. Along with many other festivals, these days Christmas and New Year are also one of the most popular celebrations of the country. People go out for meal and barbeques along with families and friends, on this auspicious day.

Similarly, during Christmas, people tend to decorate their respective hopes with a Christmas tree. Various decorative items are found in marts and malls marking the start of the beautiful festival. Likewise, people tend to exchange gifts on the day of Christmas also grabbing a feast with family and friends on the day to mark the festival. Children receive a lot of presents from their parents and other families as well as from the mythical figure, Santa Claus. These days Christmas is becoming an overwhelmingly commercialized holiday, with many households investing a large portion of their income on presents and foods. People even organize charitable work in the month of Christmas. Christmas Day is now a combination of holiday celebrations with lots of fun for all the religion type in Nepal.

What to do During Christmas in Nepal?

If you are not a party animal, you can easily escape to the exotic naturally beautiful places such as Manang, mustang, and so on during the festive season. They are the place which is less crowded and can easily get a lifetime experience with nature. Even if you do not celebrate your Christmas in your home country, we assure you that you will not regret visiting Nepal.

The Christmas is particularly noticed in the places like Durbar Marg, Thamel, Basantapur, Boudhanath and Jawalakhel of Kathmandu valley. In the same way, other than Kathmandu valley major tourist destination such as Biratnagar, Kaski, Chitwan, Dharan, Pokhara, and Nepalgunj are popular for Christmas festivities.

The Best Place for Christmas Celebration in Nepal

As we all know, the commercial aspect of Christmas has drifted into Nepal over the past few years. Visit one of Bhatbateni’s shopping centres, and you’ll probably find a Christmas tree on show on December. Thamel has tourism management committees in Kathmandu and Lakeside in Pokhara, which sometimes bring up a bit of bunting on the roads. During Christmas Eve, you can visit the various lounge and bar with family and friends in these major cities that give you some sort of discount Christmas complimentary. On this day, these bar and lounge is pretty crowd making the festival even more enjoyable.

Other than Kathmandu, many tourists prefer visiting Pokhara due to its exotic scenario and refreshment option. Since Pokhara city is a major destination, Christmas is also celebrated with great enthusiasm. Decorative Christmas tree is present in malls and lodge along with mouthwatering feast. All the Churches in the city organizes a Christmas party where people exchange greetings and gifts.

Dharan is no less when it comes to the celebration of Christmas. Many people out their organize a feast in their home and share gifts. Many lounge and bars also offer a huge festive discount in case of meals. Since, on a Christmas day, the whole nation experiences a holiday, many people visit their relatives to exchange greetings.

Growing Business in Nepal During Christmas

Since many people are investing their time and energy to celebrate festivals other than Hindu festivals, there is a positive impact on the business. Christmas is the time of the year which can attract a huge number of clients to restaurants and café with the unique décor and festive offers. Celebrating Christmas these days is highly influenced by the western way of celebration so, during this season, Christmas-themed parties are held in most of the restaurant.

A considerable number of malls and shopping centre decorate their hall with trees and various other jewellers to attract customers. The company is putting up with a lot of fanfare big Christmas trees and Christmas decorations in all their places. During Christmas and New Year’s, retailers have started offering deals on items. These deals and decors have given a new market to the businessman in Nepal.

Why Nepal has one of the Fastest Christians Growing Population in the world?

Renowned for its high peaks and wind-whipped prayer flags, Hindu-majority Nepal was once a country where Christians couldn’t reach up to the mark. Interestingly, according to the World Christian Database, which records global trends in Christianity, now Nepal has one of the world’s fastest-growing Christian communities. As per the data, there were no Christians by the end of 1951; however, by the end of 1961, there were altogether 458 Christians in Nepal. There were almost 102,000 by 2001. This figure had more than tripled to over 375,000 a decade later. Study assumes that the growth is much more significant, but exact details are not recorded yet.

The country’s Christian Population is continuously increasing each year. While the National Population and Housing counting carried out by the Central Statistics Bureau had estimated the Christian community is around 375,699, the Federation of National Christian Nepal (FNCN) umbrella group of Christians reported that the current Population was at least 3 million. That means that over the past five years, the Christian community in the nation has grown eight times. The FNCN reports that more than 8,500 churches throughout the country as for now. So, we can easily say, Nepal is embracing festivals other than Hinduism with a warm heart.

The Origin of Christianity in Nepal

Catholic Capuchin missionaries were allowed to reside in Kathmandu valley in 1715 by the King Ranjit Malla. Impressed by the King’s welcoming nature, Capuchin composed a treatise on monotheism for the King. Although he did not convert, the King persuaded some of his people to be Christians in his place. The Capuchins managed to make a small number of voluntary local converts. With the passing time, Nepal also went through the phase of Hindu nation where the majority of people were Hindu. However, ever since 1715, there has been a rise in Christianity in Nepal. So, the far majority of Christian in Nepal evangelical Protestants and few are Catholic. As per the statistic’s, only 10,000 Catholic’s are living in Nepal.

Why is Christmas Celebrated in Nepal?

Although the Population of Christianity is not as abundant as Hindu, people here in Nepal celebrates Christmas with great fun and enjoyment as it is a secular state. With the increment of Christianity and people accepting religious tolerance, Christmas also holds a special place in people’s heart these days.

Many Christians believe that Jesus Christ is the incarnation in the Old Testament of God the Father and the predicted Messiah (the Christ). They also firmly believe that Jesus Christ enables people to be reconciled to God. To celebrate the birth of holy Christ, Christmas is mainly celebrated. Since many people with Christianity belief also resides in Nepal, it is obvious that Christmas is also celebrated in Nepal.

The History of Santa Claus

The title “Santa Claus” emerged in Turkey of the fourth century as Sinterklaas, a Dutchmen named Santa Nicholas, a Byzantine priest. St. Nicholas became one of the most admired and loved priest of all times due to this kindness and purity. It is said he gave away all of his hereditary wealth and travelled the countryside to help the poor and sick. One of St. Nicholas’ best-known stories is the time he saved three poor siblings from getting sold by their biological father into prostitution by giving them a dowry to marry. Nicholas reputation expanded over the course of many years, and he became the defender of kids and sailors. On the anniversary of Santa Claus death, December 6, his feast day is celebrated worldwide.

The History of Christmas Tree Decoration

Before the emergence of Christianity, all-year-long green plants and trees had a meaning to the people in winter. As for now, people embellish their home with oak, spruce, and fir trees during the festive season, ancient peoples covered over their doors and windows with evergreen trees and plants. Evergreens are believed to keep away demons, goblins, evil spirits, and illness in many cultures in different countries. However, the decoration of the Christmas tree began from German. These days, along with America, various other countries grow Christmas tree for the sake of continuity of their culture and traditions. Even in Nepal, many malls and shopping centre erect huge Christmas tree marking the Christmas month.

Why is Christmas Celebrated on December 25?

Weather of Nepal in November

Overview - Weather of Nepal in November Weather can vary from place to place. It is never constant as the weather can be bright and...
Read more
Uncategorized

Origin And Meaning Of Nepali Dance

History Of Nepali Dance Nepali dances have evolved from the time when Nepal was established and the cultures started...
Read more
Uncategorized

Overview Herbs/Jadi Buti (Flora And Fauna) Generally, herbs are those plants that have a particular smell that is used for garnishing food, or for fragrances;...
Read more