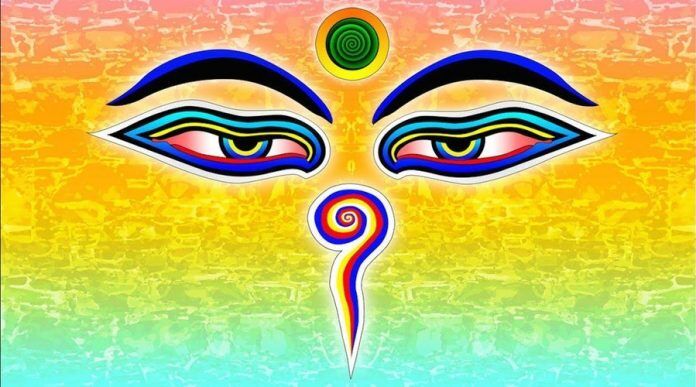 In every stupa, there are giant pairs of eyes on the four sides of the tower. The eyes that look in the four directions symbolize the all-around seeing of Buddha. These eyes are prevalent throughout the country and have become a symbol of peace.

Between the Buddha’s eyes, there is the curly symbol like question mark which symbolizes the character for number one for unity to reach the enlightenment. The third eye means the all-seeing wisdom of the Buddha.

Eyes Of The Buddha

Buddha is known as the light of Asia and has become the symbol of peace, harmony, wisdom, and conscience. He was a prince in his palace when he left his home to search for the truth and meaning of life.

After many years of medication and traveling to different places, he acquired the enlightenment. After this, he started teaching and passing his knowledge to his followers and assist them to know about the meaning of life and happiness they get after meeting the needs. These teachings of Lord Buddha have become the principles of Buddhism which later became the world’s renowned religion.

Buddhism spread across the continent of the home of Buddhism and it modified the local culture. Because of this the local people easily followed Buddhism as their religion. Thereafter, the Buddhist arts also flourished in regions like Burma, China, Japan, Thailand, Nepal, etc. These regions have their own styles and variations in the Buddhist arts and crafts.

Though there are variations in the styles and arts in different countries, the Buddhist arts remain somewhat similar for all the Buddha images and statues. One of the symbols which represent the same meaning in all countries in the eyes of Buddha.

Meaning Of The Buddha Eyes

Every Buddha stupas from countries like India, Nepal, Thailand, Burma, and China have pairs of eyes in a meditation state enriched with the spiritual aura. This type of style of making the pair of eyes has become a trend in many generations of artists in the Buddha heads and Buddha images.

It is clearly understood that the eyes in the Buddha statues and Buddha’s heads are also of two kinds. The material eyes are the two eyes that see the outer world while the inner eyes or the one which sees the Dhamma is one in the middle of two material eyes. The Buddhists often call the inner eyes as the urna.

Eyes Of The Stupa

In stupas, there are giant pairs of eyes that are looking out from the four sides of the stupa. These eyes are also known as wisdom eyes or Buddha’s eyes. These eyes in the stupa symbolize the all-seeing ability of Buddha.

If we use the wisdom eyes then we see the truth and we can fulfill our dreams. But if you become ignorant and do not use our wisdom then we will be cheated, become anxious and suffer a lot in our lives which are called the darkness of life and it can be overcome using our wisdom.

In the ancient centuries of Buddhism, the statues were not used but there were Buddhist arts which consist of images which symbolize the Buddha and his teachings like the lotus, the wheel of the law, the Bodhi tree and Buddha’s footprints. Buddha images represent Buddhism but the early symbols became popular and are frequently used in Buddhist countries like Sri Lanka and Thailand.

When Buddhism spread, the Buddhist symbols were enriched by the cultures of the different country where the Buddhism flourished. In Tibet, the rich symbolic tradition developed. These symbols of Tibetan Buddhism are called the Eight Auspicious Symbols which are known as Ashtamangala.

The Eight Auspicious Symbols are copied on the Tibetan prayer flags, Mandalas, and Thangkas. Wheel of life is another symbol which is the symbolic representation of the universe according to the Tibetan Buddhists.

Other important symbols used in Buddhism are the five colors which are white, yellow, red, blue and green. The symbolic hand gestures called mudras are also used as the symbolic representation of Buddhism.

Some Of The Important Buddhist Symbols

1. Bhavacakra( The Wheel Of Life)

It symbolizes the numerous Buddhist themes and teachings and the perspective of Buddhist on life. It also provides information about the Yama who turns the wheel of life and holds it in his hands.

The middle ring of the wheel portrays the six realms of existence and the outer ring shows the 12 links of dependent origination. The old man carrying a burden in the outer ring represents that the birth naturally leads to aging and death.

2. Buddhapada( Footprints Of The Buddha)

The footprints of Buddha are the early representations of Buddha in the ancient stage of Buddhist arts. These footprints are highly available in countries like Sri Lanka and Thailand.

According to Buddhism, it is said that after the Buddha attained enlightenment, his feet made an imprint in the stone where he stepped. It is also said that the newly born Buddha took seven steps after his birth to symbolize the spiritual domination of the universe.

Buddhapada signifies the Buddha’s absence now. The footprints are depicted with the toes of all one length and with a dharmachakra wheel in the center. The sculptures of Buddha’s footprints are usually protected in the special temple structures.

In Tibetan Buddhism, the five colors symbolize the state of mind, a celestial Buddha, a part of the body, a part of the mantra word Hum, or a natural element. There are different meanings for all the colors in Buddhism which have significant importance in this religion.

Black represents the killing and anger, white symbolizes the rest and thinking, yellow denotes the restraining and nourishing, red denotes the subjugation and summoning and the green represents the exorcism in Buddhism. These colors play a significant role in the life of many Buddhists.

Some Buddhists talk about the three basic parts which symbolize as: the hub represents the moral discipline, the spokes represent the wisdom and the rim represents the training in concentration. These have equal importance in the religion of Buddhism.

The eight auspicious symbols or ashtamangala are a group of lucky symbols that are seen in many Buddhist textiles and paintings.

The Eight Auspicious Symbols Are:

Mudras are generally Buddhist hand gestures. These are the gestures used during Buddhist meditation or ritual. These are used to generate the forces that invoke a particular Buddha and are used as Buddha images in many countries in the world. Some of the mudras are Abhaya Mudra, Bhumisparsha Mudra, Dharmachakra Mudra, Dhyana Mudra, and Varada Mudra.

The swastika is a cross with four arms and is almost clockwise in Buddhism. It represents the Buddha’s heart and footprints and signifies the good fortune. It is often used as the clothing decoration in Tibetan Buddhism.

The image of Buddha’s eye represents the wisdom eyes of the Buddha. The Buddhists people will be learning the teachings of the Lord Buddha in unity and will be seeing all round things of the environment. The third eye is associated with the religious visions and those who can utilize the third eye are often known as seers.

Buddhists eyes of compassion are a major field to be understood while knowing about Buddhism in the world. Countries like Burma, Sri Lanka, China, and Nepal are major countries where the light of Asia called Gautama Buddha is worshipped and followed by millions of followers.